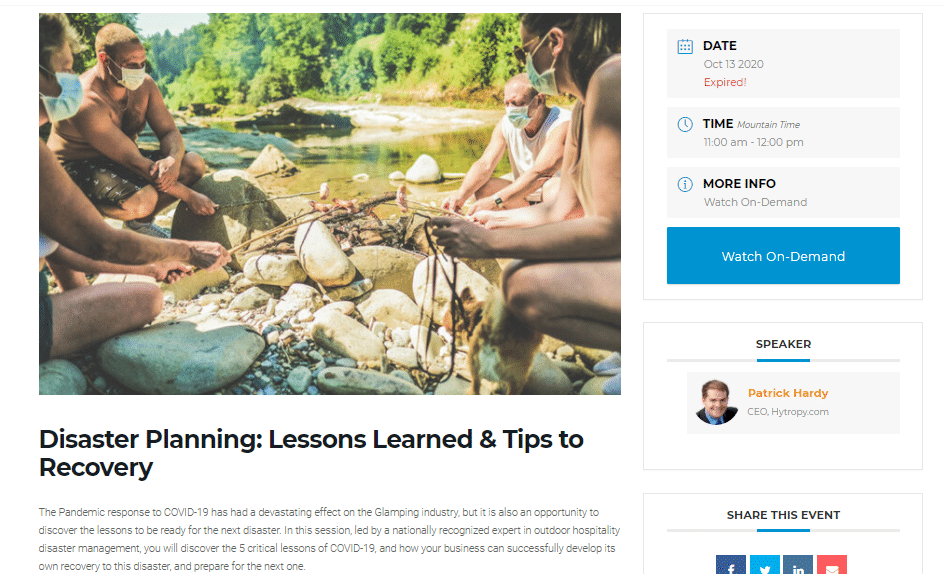 The Glamping Show USA — held virtually this year due to the COVID crisis — wrapped up on Thursday (Oct. 15) with a final total of 1,540 users logging into the system over the show’s three-day run.

David Korse, the organizer of the show, said it exceeded expectations.

“Our biggest concern was if everything would work properly, and for the most part everything did,” Korse told WOODALLSCM.com after the final session on Thursday afternoon. “We accommodated everybody. People could get their work done, they could consume content, they could interact with colleagues. So, mechanically or digitally, I guess from our point of view, it was a home run.”

The show attracted individuals from 88 different countries and 49 states, noted Korse. There were a total of 62 vendors that took part in the show’s expo.

Final registration totals before the show started showed that over 1,600 attendees had registered, not including vendor numbers. Admission to just the expo was free, but more than 200 had paid to take part in the show’s 11 educational sessions.

“We saw around 300 new users log in on Wednesday compared to our Tuesday traffic, and we are still working the numbers to see how many new people logged in on Thursday,” Korse explained. “There were around 700 or 800 people on the site at one time. A lot of people who were there on Tuesday came back and continued to do things on Wednesday and Thursday.”

Korse pointed out that the show’s educational sessions were well attended on all three days, with nearly 100 people attending the show’s final session on Thursday.

“It was great to see that kind of audience for the last session of a three-day conference,” Korse highlighted. “The attendees of the sessions have told us that they liked the quality of the speakers and that the variety of content was outstanding. On average, each session had around 100 people that attended.”

Antidotally, Korse noted that the vendors he had spoken with were all very pleased with the show as well.

“I think 12 to 13 leads at the end of the second day was the lowest any vendor had told me they had seen,” he said. “Other people had told me that they had way more than that. We are going to go over the numbers more in-depth and provide a recap report to each vendor that includes the numbers on all of the people that reached out to them.

“People seem to feel that there were really well qualified, interested people,” Korse continued. “And in some cases, they were making appointments for phone calls and video calls and they were conducting business and that was what we were hoping for and it happened.”

The show moves into its on-demand phase starting today and running through Oct. 31. It will give conference delegates the chance to review sessions that they may have missed during the live broadcast and to enable everyone in the glamping business to view the exhibitors’ area.

“If you paid for the conference program, you click on sessions just the way you did for the live session and then all 11 sessions will be there on demand,” noted Korse. “We’ll also have copies of the presenter’s PowerPoints for those who had PowerPoints. Attendees can download the PowerPoints or watch the sessions again.”

Korse said that he has received positive feedback from attendees that were not able to attend last year’s in-person event in Colorado mainly due to the cost or the show’s timing.

“They liked that they were able to participate and take in the educational sessions,” he explained.

It has also spurred Korse to look at ways of hosting a hybrid conference next year, that will feature an in-person portion as well as a virtual component.

“Maybe we will try to livestream the educational sessions and provide a digital footprint for vendors as well,” he said. “I think we will try some type of hybrid event next year.”

The Glamping Show USA is set to take place from Oct. 6-7 in Aurora, Colo.

You can still register to take part in the on-demand phase of the show, for more information and to register, visit www.glampingshow.us.