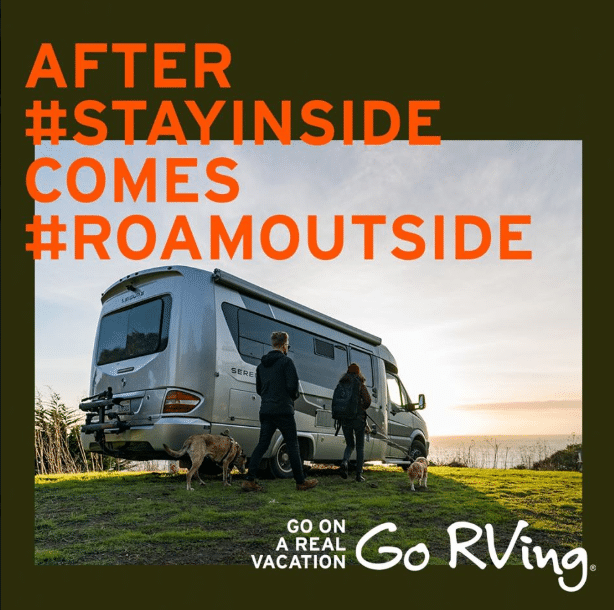 Go RVing’s brand new campaign, Go On A Real Vacation, has reached nearly 264 million people through advertising on social media and radio since launching in early June, according to a report published in the RV Industry Association’s News & Insights.

The series of ads serve as a reminder to people of the freedom that comes with traveling in an RV, driving the consumers to their nearest RV dealership where they can join the 46 million Americans planning an RV trip this year.

The social ads, running on Facebook and Instagram, have four themes as its creative base: #RoamOutside, You Need an RV, You Can Control Your Destination, and Your House, Your Rules. Each theme has multiple variations of vehicles, people, and locations, allowing consumers to find a message that personally resonates with them.

Since launching the paid campaign on June 8, it has garnered 34.9 million impressions — which does not include Go RVing’s organic social media, which has been running the new campaign since May 14.

The radio ad, running on traditional radio and streaming services, plays off relatable “indoor recreation” experiences many Americans were forced to adopt over the past couple of months during stay-at-home orders. It turns those experiences from “what was” to “what can be,” with an RV and ignites the desire to get back outdoors and discover a better way of travel in this “new normal.”

The ad targets specifically outdoor enthusiasts who enjoy sightseeing, spending time with family, visiting the beach, and historical sights, the main audience of Go RVing, and heavy consumers of radio. Since launching on June 3, the radio ads have garnered 228.9 million impressions.

Go RVing is currently working on additional components of the Go On A Real Vacation campaign, including print and television ads. Be sure to follow Go RVing on Instagram and Facebook to see the latest ads!