Go RVing Canada is Opting for Own Ad Creative

Convinced that current lifestyle ads aren’t generating enough “recall” among Canadian consumers, the leadership of Go RVing Canada has informed the all-industry Go RVing Coalition that it will be developing its own ad creative for the next round of the Go RVing marketing campaign.

After the most recent coalition meeting at the RVDA Con/Expo in Las Vegas, however, Go RVing Canada spokesmen were downplaying the long-term significance of the decision and any negative impacts it might have on the growing cooperation between the two countries in partnering on the market expansion program which amounts to media buys this year of $10.3 million in the U.S. and $2 million in Canada.

The Canadians just think there might be a more effective creative approach for reaching their consumers versus the softer lifestyle imagery projected by the most recent slate of ads created last year by the coalition’s creative sub-committee and its Dallas-based agency, The Richards Group.

“It’s all about recall,” says current Go RVing Canada Chairman Darren Gelowitz of Village RV, Regina, Saskatchewan, who also serves on RVDA of Canada’s board. “In our studies, we found the recall on the ‘Away’ campaign wasn’t as memorable as some of the previous studies. That’s the only reason.”

Consequently, says Gelowitz, Go RVing Canada plans to go into production shortly with its own 2013 creative. 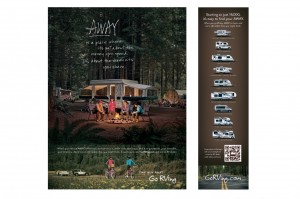 One of the print ads for the “Away” campaign.

“It will have a slight slant on things,” he added. “’Away’ was a great commercial but it was more about destinations, where ours is going to do a little more tugging on the heartstrings of Canadian families. We really embrace the cooperation we have with Go RVing in the States, and trust that, going down the road, things will turn out good.”

“I see the Go RVing Away campaign in the U.S. as a huge success,” Chris Mahony, executive director of Go RVing Canada, told RVBUSINESS.com. “For us in Canada, it was very well liked. Some of the recall was OK, but when we really delved into our tracking study for our recall number — and we are doing a sample size of around 2,000 people — the recall was the lowest we’ve seen in the last few years.

“It was significant for us because we just pumped up our media budget by 129%,” Mahony explained. “We’ve been tracking these results for about 10 years. Essentially, with those recall numbers where they were, despite the likability of the ads, the board of directors and our (Canadian) agency felt it would be best for Go RVing Canada to potentially look at new creative for 2013.”

Go RVing Canada, in turn, will work for more of an “emotional hook” that better appeals to Canada’s own demographic. “We are going after an alarming societal trend where we see over-programming, over-scheduling and overly busy families,” Mahony commented. “So, we want to start the ad with a very detached, disconnected family and show how they can connect with one another through the RV experience.

“It’s a bit younger approach,” he added, “and we are using some dialogue which we hope will add some comedy into it as well. In speaking with industry members and a lot of consumers, the (current ‘Away’) ad was very well liked. It was a super ad. It’s just that, for our numbers, our demographic, the recall wasn’t quite there. We just didn’t quite get their attention.”

Asked to comment on the Canadian decision, RVIA President Richard Coon, whose association owns the campaign along with RVDA and currently collects and distributes seal fee assessments for both countries under an agreement reached within the past year, issued the following statement:

“We’ve worked hard the last three years or so to ensure that the Canadian entities — the dealer organization and manufacturer organization — are hand in hand with us as we developed the ‘Away’ program. They used one of the ads this past year. And it’s my understanding, even though it was successful and people liked it, that the retention wasn’t where it ought to be in their opinion, so they are thinking perhaps of doing something different next year. We would hope that they keep us advised about what they are going to do as we continue to work together as a team on Go RVing and promotional advertising. We’ll see where it goes.”