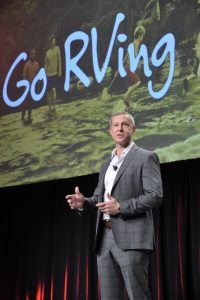 According to a press release, the RV industry’s national advertising and marketing communications campaign consists of RV manufacturers, component suppliers, dealers and campgrounds, and works to provide the public and media with general information about the benefits of RV travel and camping. The campaign launched in 1997 with the aim of boosting RV sales that were hovering around 250,000 units per year. Two decades later, the industry is looking forward to record high 2017 shipment estimates of more than 505,000 units.

“Go RVing has been a great collaborative effort by the industry and a campaign that’s admired by other industries,” said Karen Redfern, RVIA’s vice president, brand marketing and communications. “We were able to get competitors to band together for the good of the entire industry and keep them together.”

From its beginnings to now, Go RVing has evolved with hemes changing from “Wherever You Go, You’re Always at Home,” to the current tagline, “Find Your Away,” while marketing efforts have become more multi-faceted incorporating digital, social and event-driven elements. What’s stayed the same: the collaboration.

Co-chair of the Go RVing Coalition Bob Wheeler stated, “Go RVing is positioning itself to be the consumer data and market trends leader for the industry, and we have three major Go RVing research projects underway that we will unveil later in the spring. This research will help us understand the American millennial consumer and their perceptions about owning and using RVs, as well as market and consumer trends impacting their behavior.”

Chairman of the RVIA Public Relations Committee Chad Reece noted, “From advertising, to experiential marketing, to our PR efforts, the Go RVing program literally brings the RV lifestyle to life for consumers.  So be proud – and I hope you’ll join me in continuing to support this all-industry endeavor.  Here’s to 20 more years.”

Dan Pearson, co-chair of the Go RVing Coalition, explained the importance of providing opportunities for people to experience RVs in unexpected places. “Research, data and numbers are all great, but we also know we connect best with consumers when they can see, feel and touch an RV,” he said. “That is exactly why Go RVing has brought RVs to hundreds of major consumer events where they never would have expected to see one. Over the past six years, more than a half million consumers have been introduced to RVs at Go RVing events. Over 150,000 this year alone.”

Go RVing is hosting booth in the South Wing by the lobby at the Louisville Show offering an interactive celebration of where the campaign’s been, where it is now and where it’s going. There will also be several “Power Talks,” a series of short TED Talk-type chats by industry authorities providing insights on millennial engagement, how to reach the next generation of RVers and other consumer trends and attitudes.