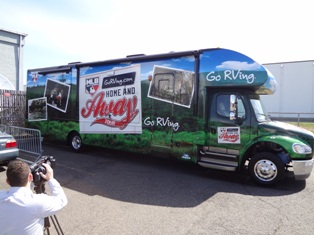 The Go RVing and Major League Baseball (MLB) Network “Home and Away Tour” is on the road with a specially wrapped Jayco motorhome serving as a touring studio broadcasting features during the MLB Network Game of the Week from ballparks across the nation.

Through this special promotion negotiated as a value-added element to Go RVing’s 2012 media buy with MLB Network, there will be on-air reports and interviews with players conducted both inside and outside the motorhome over the next two months on the popular On Deck Circle, the network’s signature show featuring major league baseball highlights and analysis.

There will also be teasers and promotional mentions of Go RVing and the “Home and Away Tour” on The Run Down and the MLB Network Game of the Week. Video highlights showing the exposure being generated by the promotion can be seen by clicking here.

The “Home and Away Tour” motorhome is a Jayco Seneca 37RB type C motorhome, which the company provided in response to an RVIA-member lottery invitation. It is wrapped with visuals from the new Go RVing “Away” national advertising campaign as well as logos for Go RVing.com, MLB Network and Jayco. The tour kicked off earlier this month with the motorhome appearing at the Florida Marlins vs. Philadelphia Phillies on April 12 and at the Texas Rangers vs. Boston Red Sox on April 17.