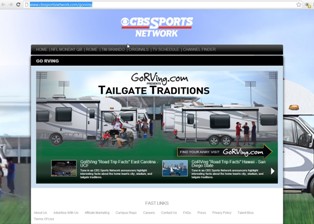 Tailgating and RVing go hand in hand during football season.

This weekend is the kickoff of Go RVing’s partnerships with the NFL Network and CBS Sports to bring the Go RVing message into the livingrooms of thousands of NFL and college football fans.

Recognizing that RV tailgating is integral to the football experience, both networks will focus on how tailgating enhances the gameday environment, according to a news release.

The NFL Network custom vignette will make its premiere showing on Sunday, Oct. 21, during Game Day Morning, 9 a.m. -1 p.m. EST. The 30-second spot opens with, “Away is the sight of your team’s colors that makes the parking lot feel like home,” while viewers watch fan tailgating footage shot earlier this season. The vignette will continue to run weekly during Game Day Morning, adjacent to Go RVing brand spots, through October. The NFL Network reaches 68 million households.

In addition to the vignettes, the first half of live SEC football games feature Go RVing Road Trip Facts where an animated RV drives on screen to deliver three trivia facts about the college, stadium or tailgate experience for each week’s matchup. CBS Sports has created a dedicated microsite within their website to house the Road Trip Factsfrom each game as well as the custom vignettes once they air. You can log into the website at http://www.cbssportsnetwork.com/gorving. Revisit weekly to see the newest vignettes and in-show trip facts.