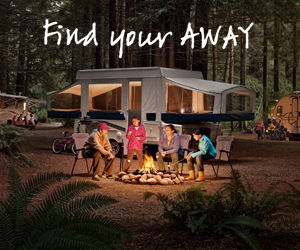 The Go RVing Coalition’s “AWAY” campaign has captured the attention of consumers, delivering a 45% increase in leads year-to-date and increasing awareness of the campaign across nearly every audience segment.

According to a press release, research commissioned by Go RVing and performed by Russell Research to measure the public’s interest in RVing and their overall awareness of Go RVing advertising shows significant gains since the last study in 2010. Conducted over the summer, the survey found:

• Respondents aware of the 2012 campaign (18%) were more than four times as likely as those unaware (4%) to have visited the website.

Another key measure of consumer engagement is visits to GoRVing.com, which has seen a 20% increase in page views. The revamped website is the workhorse of the campaign, and the new functionality and use of video/animation enhances the consumer experience while reinforcing the emotional draw of the “AWAY” campaign creative.

“When the site relaunched in February, having a mobile compatible version was key with over 107 million reported smartphone users in the U.S. today and an anticipated 50% of all web searches being done on a mobile device by 2014,” said James Ashurst, Recreation Vehicle Industry Association (RVIA) vice president of advertising and public relations. “That was the right move for our campaign because over 200,000 web visitors have come through the mobile site so far this year. Of that number, roughly 14,000 have used their smartphones to scan the QR codes in the ‘AWAY’ print ads.”

The digital space continues to perform well, pulling in 41% of new leads. Creating digital ads that virtually take over an advertising partner’s page, captures the attention of web surfers which drives them to GoRVing.com for information. Animated online ads coupled with Apple’s ground-breaking iAd product that created a game-like version of the “AWAY” ads, plus a digital game hub on GSN.com, allows Go RVing messaging to reach target market consumers in innovative and engaging ways.