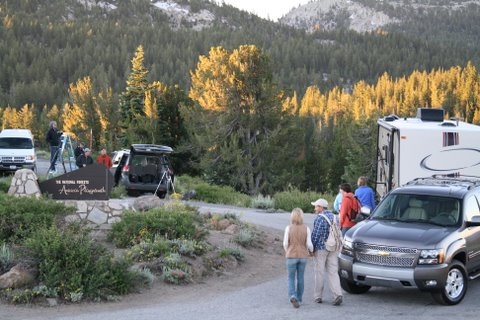 Filming for Go RVing’s three new 30-second “AWAY” television commercials is taking place this week at scenic locations in California.

New, unbranded RVs representative of today’s market conditions and consumer preferences are being provided by Recreation Vehicle Industry Association (RVIA) member manufacturers in response to a vehicle lottery invitation, according to a news release.

A variety of RV types were selected to appear in the TV ads. These include a Lance travel trailer for a family mountain adventure in the Mammoth Lakes, Calif., area, along with a Roadtrek Adventurous Class B motorhome. A multigeneration family fishing trip in the same vicinity will feature an Itasca Reyo Class A motorhome, Forest River Wildcat Sterling Edition fifth-wheel travel trailer, Lance truck camper and Airstream Flying Cloud travel trailer in a campground setting. A family beach getaway in the Pismo Beach, Calif., area will feature families with a Jayco folding camping trailer and a Winnebago View Class C motorhome.

Go RVing’s new television, print and Internet ads and website will be unveiled at RVIA’s Outlook 2012 opening breakfast at the National RV Trade Show on Nov. 29 and begin running in early 2012.

The new ad campaign, developed by The Richards Group in collaboration with an all-industry Creative Work Group of the Go RVing Coalition, returns to the emotion-driven, family focus of past campaigns, along with a continued emphasis on the affordability and accessibility of the RV lifestyle for families spanning several generations. Go RVing’s “AWAY” ad campaign is the first all-new campaign to be produced since 2005.