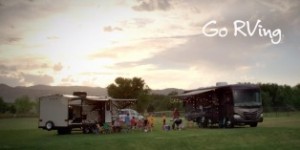 Go RVing’s new “AWAY”ad featuring a tailgating theme will debut this weekend and continue to air throughout the fall in conjunction with college football ad buys with ESPN and CBS Sports, according to a news release.

Titled “Victory,” the new 30-second ad showcases how RVs are the perfect tailgate vehicle by featuring families gathered at a girls’ soccer game where they are grilling, relaxing in and around the RVs, and enjoying each other’s company. The voiceover, once again performed by Tom Selleck, tells viewers that “Away” is always having home field advantage even when you are miles away from home.” The ad was shot in Denver in June and features a Fleetwood Storm Class A motorhome and CruiserRV Fun Finder travel trailer. The manufacturers were selected in a lottery to provide the vehicles.

A special 60-second version of the ad will air during ESPN’s highly rated College Gameday this Saturday. The ad will continue to air on the program each Saturday morning through the season. Footage of RV tailgating will lead into a Go RVing commercial in the “A” position of the program. There will be additional exposure on ESPNU and ESPN2.

The ad will also be featured on CBS Sports coverage of college football, including sponsorship of the Thursday night Inside College Football post-game show; custom-produced “Tailgate Tradition” vignettes airing on This Week in the SEC and Inside College Footballas well as online on CBSSports.com; and Road Trip Fact graphics featuring the Go RVing logo airing in 15 live college football games.

The utilization of the “Victory” ad is part of Go RVing’s focus to leverage the strong connection between RVing and college football tailgating and keep positive messages about RV travel in front of consumers throughout the year. Go RVing typically would significantly scale back advertising in the fall and early winter months.

“We are very excited about the buys with ESPN and CBS Sports” said James Ashurst, RVIA vice president of public relations and advertising. “This audience of college football fans will be very receptive to the versatility, convenience and family bonding messages found in the new television commercial. This is a great way to extend Go RVing’s awareness building later into the year.”

He added, “Today’s families are really involved in their kids sporting and extra-curricular activities. The new ‘Victory’ ad strongly communicates that an RV can enhance the tailgate experience and the family bonding that takes place at sporting events at any level of competition. There are beautiful exterior shots, but we also intentionally focused on kids and parents enjoying the great amenities found inside the RV. This was done to show the versatility of RVs and to compel consumers to begin thinking about RVs in a different light.”