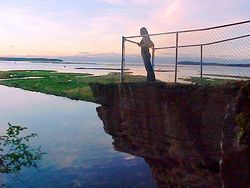 While the 2010 Winter Olympics are taking place only 30 miles away in Vancouver, British Columbia, Nanaimo’s Living Forest Oceanside Campground & RV received word that for the fourth straight year, readers of RV West magazine have voted — and the Vancouver Island campground won the Gold Medal for Favorite Snowbirding RV Park in BC, and the Silver medal for Favo rite Privately Owned & Operated RV Park in BC.

“We have such an enthusiastic hospitality staff, and they are truly passionate about this incredible island we call home — they really love to show it off. To be recognized by our Living Forest campers again and again feels great — just fantastic,” said Laurel Sliscovic, Living Forest office manager, in a news release.

When she’s not behind the front desk fielding calls and e-mails that cover an endless range of questions from an international clientele, she’s apt to be in coveralls tending to one of the many flower gardens in the park. It’s that kind of staff dedication that led to the park’s motto: “the only thing we overlook is the waterfront.”

One of the top 25 Campgrounds in Canada

And the readers of RV West magazine are not alone in their praise for Nanaimo’s Living Forest. In an article listing the Top 25 Campgrounds in Canada, national magazine Today’s Parent, named Living Forest Oceanside Campground & RV as one of two British Columbia parks to make its exclusive list.

Camping today is a very different experience from days gone by when dad hauled a leaky canvas tent out of the trunk after a long drive to somewhere in the bush. Now campgrounds need to supply an extensive package of urban amenities, but still make campers feel like they’re a part of the natural world. For example, Living Forest offers a gourmet coffee deck with Wi-Fi and laptop charging stations like any Starbucks, but this outdoor deck is perched above a jaw-dropping view of the quiet waters below that kayakers and swimmers share with salmon, seals, otters and eagles.

Some RVs are more luxurious than homes (Oscar winner Kathy Bates went unrecognized by other campers at Living Forest for a week of rare down time in her sumptuous RV — staffers in the know kept quiet even as she washed her duds in the park’s onsite Laundromat ). At the other end of luxury scale, tents are still popular. Tents used for bicycle touring are tiny crawl-in shelters, while new family tent designs can be sprawling multi-room units with space for everybody.

The campers themselves are just as diverse. Some are locals out for a weekend getaway, some are touring RVers from Europe who want to see all of Western Canada in three weeks behind the wheel of a rental RV, and some are retirees with big rigs who are full-time RV’ers, calling their rolling accommodations home. They all have different camping needs but they all share a love of the outdoors and a desire to see the world up close.

What makes an award winning park?

To create a successful camping destination in a paradise like Vancouver Island requires a blend of rare ingredients. Take a property that’s geographically special, one that’s close (but not too close) to island attractions and main roads, build serviced sites that allow some elbow room, and then toss in a long list of modern luxuries like cable, Wi-Fi, a clubhouse with games room, fireplace and big screen TV. Toss in tiled bathrooms and showers, a cafe, laundry facilities, playgrounds and trails for walking and cycling. Make sure it’s quiet and clean. Carefully blend and serve with a great staff and, presto — one has a great campground like Living Forest.

With over 50 acres and water on three sides and towering trees, Living Forest satisfies the call of the wild, yet it’s only a five-minute drive to downtown Nanaimo and there’s a shopping centre within walking distance for supplies.

Camping on Vancouver Island RV parks is a year-round love affair. In late October, thousands of salmon parade past Living Forest Oceanside Campground & RV in their quest to spawn. That also marks the arrival of Snow Bird RVers who want to escape the harsh winters found further away from the coast, but don’t want to venture south of the border for any number of reasons.

Central Vancouver Island is known to have the mildest winters in Canada, a place where people can golf, ski, cycle and even scuba dive year- round. The Canadian Snow Bird lifestyle is particularly appealing to retired RVers who want to enjoy the low off season rates and recreational opportunities the Island offers, without the headaches of borders and foreign health care issues.