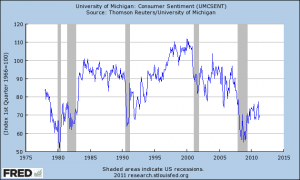 Consumer sentiment rose to its highest level in six months in early December as Americans adopted an improved economic outlook while the trade deficit narrowed in October, pointing to gathering momentum in the economy, according to Reuters.

The Thomson Reuters/University of Michigan’s preliminary reading on their index of consumer confidence climbed for a fourth straight month to 67.7, beating expectations as it rose from 64.1 in November.

“U.S. consumers appear to be ending the year in a better mood,” said Paul Dales, an economist at Capital Economics in London.

Improved confidence could lead Americans to spend more readily, which would add to the recent momentum from retail sales and factory output. At the same time, the narrowing in the trade deficit showed more of the purchases U.S. businesses and consumers are making were produced within the country.

Employment has also made gains in recent months, although some economists expect the pace of improvement will be too slow for consumers to ramp up spending for long.

“Although the recent increase may provide that little bit of support to spending in the malls in the coming weeks, it won’t lead to a long and lasting acceleration in consumption growth,” said Dales.

The sentiment reading exceeded the 65.5 forecast by analysts who were polled by Reuters.

Measures of consumers’ current and future assessment of economic and financial conditions also rose to their highest levels since June. The gauge of consumer expectations jumped to 61.1 from 55.4 in November.