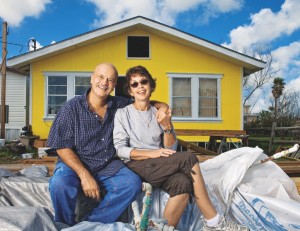 The Good Sam Club, the world’s largest recreational vehicle owners’ organization with nearly 1 million member families, has announced the recipients of the Good Sam 2009 RVer of the Year Award, according to a news release.

Monty and Susan Scales, hurricane relief volunteers currently living in San Leon, Texas, are recognized for their hands-on refurbishment work and volunteer coordination in communities throughout the Gulf Coast region.

The annual RVer of the Year award recognizes a member of the RV community for achievements that benefit fellow RVers or the community at large. Monty and Susan, Good Sam Club members currently living in a fifth-wheel parked in a campground in Texas, will be featured on the front cover of the January 2010 issue of Highways magazine.

“Monty and Susan are a wonderful example of how our members strive daily to make the world a better place,” said Sue Bray, executive director of the Good Sam Club. “The Scaleses’ unflagging determination to help needy storm victims and coordinate additional volunteer efforts inspired fellow members to select them as this year’s winners. This is a true testament to the ideals of the Good Sam Club — helping our fellow neighbors—and we are proud to honor members that embody this spirit.”

The couple, originally from Bloomington, Ind., enjoyed well-paying construction jobs, but that all changed in 2005 when they saw the televised images of devastation from Hurricane Katrina. Realizing that their construction talents could be put to better use, the couple quit their jobs, borrowed a trailer and headed south.

Four and a half years later, they are still on the scene – only today they are helping hurricane victims in Texas. They’ve also worked in New Orleans’ Ninth Ward and in Columbus, Ind., following the devastating floods of 2008.

After a disaster strikes, the Scaleses move into an area and look for people who need help. Many times, these are homeowners who are not eligible or for various reasons have not received government assistance. Through the support of various church groups and other organizations, the Scaleses find teams of volunteers, both skilled and unskilled, who will help to rebuild, repair and remodel homes which have been damaged.

They will take a break from their busy schedule to accept the RVer of the Year Award at The Rally 2010, the nation’s largest RV rally, taking place in Louisville, Ky., July 22 through 25.

In 2008, the Good Sam Club honored Waynesboro, Ga., native Richard Daniels with the first-ever RVer of the Year Award for his efforts to rescue injured and abandoned animals and find them permanent homes. The program expanded in 2009 and fellow Good Sam members were encouraged to vote for their favorite of five nominees through the club’s website.

In addition to Susan and Monty Scales, the other nominees for Good Sam’s 2009 RVer of the Year were:

To learn more about Susan and Monty Scales, read their blog at www.msmission.blogspot.com. For more information on the Good Sam Club, please visit www.goodsamclub.com.

Affinity Group Inc. (AGI) is the parent company of the Good Sam Club and WOODALLSCM.COM.