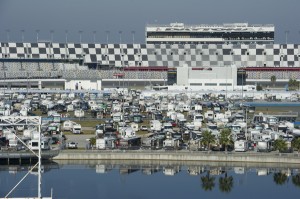 This past weekend’s (Nov. 2-4) Good Sam Rally at Florida’s Daytona International Speedway was a successful venture in most every way it could be measured by host Good Sam Enterprises LLC, an affiliate of mega-dealer Camping World Inc., based in Lincolnshire, Ill.

With attendee coaches set up in the race track’s infield, the Daytona rally drew 3,375 consumer rigs, a public gate of about 5,000, dealer displays representing over 25 North American RV builders, a total of about 400 display coaches plus a tent full of indoor vendors occupying 300 booths.

Consumers, enjoying temperatures in the 80’s in the day and 60’s at night, were treated to an agenda of activities that included 25 daily seminars, a veterans’ parade, a dog show, area tours, fireworks displays and entertainment by C&W entertainers Kenny Rogers and Reba McEntire from an outdoor stage set up near the race track’s finish line.

“We always look at it like this: We want people to enjoy the seminars, the exhibits and have a good time with the entertainment,” Good Sam Vice President of Sales Terry One of the key pluses for holding a rally at a raceway, which Good Sam also did earlier this year in Phoenix, is that it provides consumers with a convenient and fun means of test driving demonstration coaches right on the track. Thompson reported that 110 motorhomes were available from various manufacturers at the speedway this past weekend. 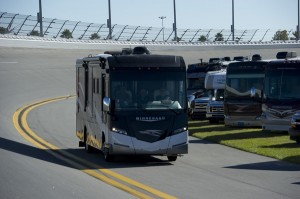 “What really helped at this rally is that people got to test drive motorhomes around the track,” said Thompson, who’s responsible for selling the exhibitor space at Good Sam’s rallies. “That’s kind of unique. You know, it’s fun. We let these guys drive all the way around. Obviously, they better stay low or they’ll tip over. But it helps people (exhibitors) get deals done.

“Of course, we can’t always hold rallies at tracks, but at least here the novelty of driving around the track is pretty cool,” he continued. “I know some manufacturers did really well, including Winnebago, Fleetwood and Tiffin. These guys were happy.”

Good Sam, the only organization other than the Cincinnati-based Family Motor Coach Association (FMCA) to host national-scale rallies at this point, registered 3,370 rigs in Phoenix and 2,033 in Louisville while next year’s two rallies are slated for Albuquerque, N.M., in April and Syracuse, N.Y., in June.Thompson tells RVBUSINESS.com. “And our hope, obviously, is that they buy a lot of product from the exhibitors and, you know, that they meet new friends and have a good experience at the rally and feel good about the lifestyle.

“And I think that all that happened here,” adds Thompson, noting that the celebrity entertainment was a big plus. “I mean, this was a big rally — to get over 3,000 rigs in early November in Florida is hard to do, and we did it, and I think people were really happy with it.”