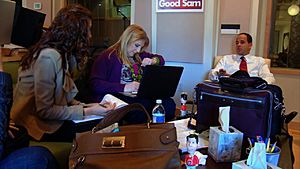 Good Sam CEO Marcus Lemonis (right) meets with some of the celebrity contestants.

An excerpted summary of the show, titled “Jingle All the Way Home,” courtesy of NBC, follows:

Star Donald Trump introduced Marcus Lemonis, chairman and CEO for Good Sam Enterprises, the RV owner organization. Lemonis described the task: the celebrities must write a 90-second jingle for Good Sam and then perform it for a live audience.

The celebrities will be judged on the following criteria: 1) the actual jingle, 2) brand messaging and 3) the performance itself.

Trump points out that Forte has a great singer in Clay Aiken, and Unanimous has Aubrey O’Day. Arsenio Hall takes over as project manager (PM) for Unanimous. He knows Aubrey will try “stealing his thunder” but he doesn’t care. Dayana Mendoza steps up as PM for Forte. Trump is surprised, having expected Clay to take it. But Dayana says it’s her turn. Trump offers $20,000 to the winning PM, and Lemonis adds to that $25,000 from Good Sam and 100 percent of the proceeds from the Good Sam mascot. 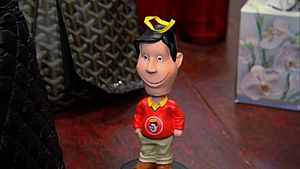 It’s performance time. As the teams are getting ready, Clay overhears Aubrey singing her jingle and listens through the curtain. Aubrey tells Dayana that she likes their jingle better. Then their ’50s themed performance goes off. While the performance goes well, Dayana is upset still that Lisa and Clay weren’t “professional” enough to include her on the task. But Clay thinks that both he and Lisa did a great job with the performance, since it’s what they do well. Lemonis was pleased with the energy of the performance, but thought that they played it safe with the material, and he was disappointed that when Dayana came out at the end of the performance, she wasn’t dressed in the Good Sam colors. Overall though, he thought they did a good job.

Unanimous does their performance. Teresa Giudice and Arsenio do their bit of being a couple stranded on the road. Arsenio thinks they did a great job and that Teresa “killed it,” while Aubrey thinks they were awful and comments on how painful it is to work with people who just aren’t as used to performing. Then, when Teresa “calls” Good Sam, the jingle starts, ending with Arsenio’s rap and Aubrey jumping into Good Sam’s arms. Afterwards, Lemonis thinks they nailed it. He loved the energy; he thought they hit the brand messaging; he thinks it looks very well-rehearsed; he can’t get the jingle out of his head, and he liked how they used the mascot. He wasn’t however crazy about the cheerleader’s outfit.

Ultimately, Trump selects Unanimous as the winner and Dayana Mendoza, who has faced elimination on at least six prior occasions and endured the wrath of several of her fellow contestants throughout the series, is fired.

Good Sam Enterprises is the parent company of Woodall’s Campground Management and www.woodallscm.com.