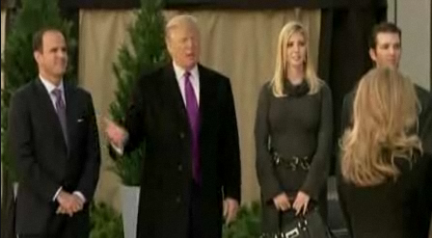 Marcus Lemonis (left) with Donald Trump on "Celebrity Apprentice" last season. The Trump children, Ivanka and Donald, are at right.

The latest season of “The Celebrity Apprentice” debuted Sunday, Feb. 19 and the Good Sam featured episode will air Sunday, April 29, on NBC at 9/8 Central and will include footage of Good Sam CEO Marcus Lemonis.

Good Sam was chosen among several Fortune 500 companies to be featured as a task sponsor on a 2012 segment on the popular NBC reality series. The episode will highlight some of the many benefits and services Good Sam provides to the community, according to a news release.

Donald Trump commented, “Good Sam, one of the world’s largest lifestyle organizations, provides a wide and wonderful array of products and services, and we are very pleased to have them on our show.” Trump continued, “I think the episode is exciting and definitely a great fit for our audiences.”

On the reality show, the contestants vie for strategic position, with competitive payoffs coming in the form of sizable donations to their designated charities. The contestant chosen as Celebrity Apprentice receives a $250,000 bonus check to donate to his or her favorite philanthropy.

Founded in 1966, Good Sam is based loosely on the Good Samaritan who offered to help a traveler in need. Good Sam’s now-iconic halo and wide grin still signify camaraderie among members and their willingness to offer aid to fellow citizens.