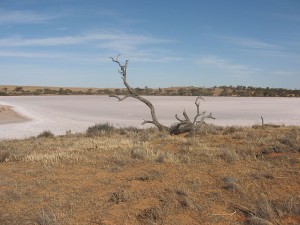 One of the Pink Lakes (salt lake) in the Murray-Sunset National Park, Victoria, Australia. Photo courtesy of Wikipedia.

Editor’s Note: If you’ve ever encountered a snafu involving the GPS coordinates for your park, you’ll appreciate reading about this dilemma that struck some tourists trying to find a national park in Australia this past weekend. The account comes from www.wired.com.

Australian authorities are urging motorists to use anything but Apple Maps to get around the Outback after the app left several people stranded in the searing desert, a mistake police called a “potentially life-threatening issue.”

Police in Mildura, Victoria, said they’ve had to rescue “a number of distressed motorists that were directed off the beaten track” and stranded in Murray-Sunset National Park. Apple Maps places the town about 43 miles away from its actual location.

It’s a potentially deadly mistake, as the location is in the middle of nowhere — the park has no water supply and temperatures can reach 115 degrees Fahrenheit.

“We’ve had at least four documented cases,” senior sergeant Stephen Phelan told The Guardian on Monday (Dec. 10) before Apple made the update. The Guardian reports that Apple updated the map today. When we tried it at 11:15 a.m. PST, the map appeared to have been fixed — Mildura was still labeled on the Map incorrectly, but navigation directions will send you to the town’s actual location. Apple had no comment when contacted by Wired.

Some of the motorists were stranded for up to 24 hours without food or water and “have walked long distances through dangerous terrain to get phone reception,”Victoria police said in a statement.

This is the latest, and perhaps most serious, criticism of the mess that is Apple Maps. The app launched in September with the debut of iOS 6, replacing the Google-built Maps app previous versions of iOS relied upon. The app has been widely criticized as essentially worthless, as people have been given erroneous directions or locations and landmarks simply did not appear. It has been such a PR disaster that Apple CEO Tim Cook apologized for the debacle and several people have been fired, including iOS chief Scott Forstall and Maps product manager Rich Williamson.

Australia isn’t alone in seeing problems with Apple Maps. In the United Kingdom, for example, angry users reported a multitude of issues like a nonexistent airport and black and white satellite imagery.

So far the app hasn’t caused widespread problems for motorists or hikers in the United States. The National Parks Service told Wired it hasn’t heard of people getting lost because of Maps or other GPS-based mapping apps. It’s the same story far to the north in Alaska, where John Quinley with the Alaska National Parks said so far, so good.