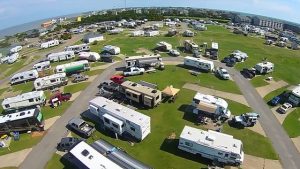 A view from above Camp Hatteras, which was severely impacted by a power outage at the end of July.

The outage plunged North Carolina’s Outer Banks, a popular vacation spot, into darkness and triggered a mass evacuation to the mainland at the very peak of the popular vacation area’s summer season.

Attributed to a construction mishap that knocked out the main power line, the issue was finally resolved on the evening of Aug. 3, following the mass evacuation of an estimated 60,000 residents and tourists. Included were thousands of visiting campers – tenters and RVers — the greatest impact having been felt on Hatteras and Ocracoke Islands.

When it hit, park operators like Jeanette Straight, general manager of 400-site Camp Hatteras in Waves, on the north end of Hatteras Island, were running at close to full occupancy.

“And then it wasn’t close to full occupancy,” reported Straight, who’d never seen a power outage like the one in July, which occurred when construction crews working on the new Herbert C. Bonner Bridge severed an underground power cable.

At the height of tourist season and with a full complement of campers already on the island, the load was too great for the generating system to provide continuous power to safely supply power for pools and air conditioning. Evacuations followed and, of course, some of the hardest hit businesses were campgrounds, which account for much of the area’s tourism revenue.

Nearly 470 campsites were closed at Cape Hatteras National Seashore. In fact, private parks like Frisco Woods Campground, on the Cape Hatteras seashore, laid off staff while reporting “devastating” losses of more than $50,000 in one weekend alone.

Ocean Waves Campground in Waves, N.C., filed a claim with PCL Civil Constructors, who took full responsibility for the outage.

“We lost a whole week’s worth of income,” said Barbara Bullock, who, along with her father and mother are owners of Ocean Waves. “Those campers who were planning a two and three-week long trip canceled their plans, which affected the weeks following the outage and restoration of power.”

Camp Hatteras’s staff, meanwhile, hit the ground running, accommodating about half their guests who stuck around throughout the blackout with the help of generators and dump stations, until things were back up and running, and visitors were allowed to return to the island on Friday, Aug. 4.

At the same time, she told woodallscm.com, Camp Hatteras from the outset opted to communicate on several levels with its customer base.

“We started marketing right away, letting people know that our facilities were ready and open as soon as they would allow visitors back in. We made sure too contact every reservation upcoming through the rest of the year with mass marketing – putting things on Facebook and our webpage, and – aside from our web page – sharing daily on social media what was happening in the area, so that the customers would know when they could get back in,” said Straight. “So, we were definitely up and operating back on the day that they opened the road. It’s just that some visitors already had other arrangements made.”

Today, things are, for the most part, resuming a more normal pace, although parks like Ocean Waves and Camp Hatteras are having to watch their business gradually return, while trailing last year’s registration levels.

“Now things are pretty much normal,” said Straight. “It did affect about two week’s worth of our campsite revenue, because people who had planned vacations had to go elsewhere, but couldn’t get on the island. And so it affected that a little bit. We’re not back to 100% as far as campsite rentals for camping nights just because people have had to go somewhere else. So, it’s affected us quite a bit.”