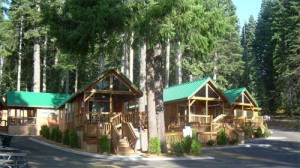 A hearings officer has ruled against expansion plans at Hyatt Lake Resort in southern Oregon’s Jackson County. The decision could lead to the removal of park model cottages, a restaurant and other improvements, according to the Mail Tribune, Medford, Ore.

In a 53-page decision mailed out Friday (Sept. 25), Donald Rubenstein concluded that the park models referred to by the resort owner as recreational vehicles are in fact dwellings that potentially pose a fire danger for the resort and the surrounding forest.

He said the resort 20 miles east of Ashland resembles a high-density residential development with some units only 7 feet apart.

Rubenstein concluded county planners erred in allowing 22 of the cabins at the resort. He rejected a request to add an additional 13 spaces.

Rubenstein acknowledged that his decision, which is subject to appeal, could be an economic blow to the developers of the resort.

“The owner finds himself in an unenviable position having invested large sums of money and effort which are jeopardized by this decision,” he wrote.

Neighbors had appealed Jackson County’s approval of a limited expansion at Hyatt Lake Resort, which is operated by the same group as nearby Campers Cove. Owners of the resort, known as Campers Cove Resort LLC, also appealed a county planning decision, saying they were entitled to additional changes they’ve requested. Rubenstein reviewed more than 900 pages from the two sides and the county.

Bob McNeely, one of the resort owners, said previously that he had already sold units that look like cabins on the 22 recreational vehicle sites and was in the process of selling four more on 13 additional sites when he was ordered to stop by the county.

McNeely has 21 days to appeal Rubenstein’s decision to the Oregon Land Use Board of Appeals. He was not immediately available for comment Monday. His Coos Bay attorney, Jerry Lesan, declined to comment, and his land-use consulting company, CSA Ltd. of Medford, didn’t respond to a phone call.

Sandy Speasl, a member of the land-use planning group, said she thought the hearings officer did a very thorough job. She said she hadn’t known what to expect going into the land-use challenge, but was happy with the results.

“To me it means that sometimes the little people have a voice in things,” Speasl said.

The resort owners wanted to install the park models on 35 spaces, but county planners determined they were legally entitled to only 22 spaces that can have water, electricity and sewage hook-ups. Those spaces have what the owner refers to as park models.

But Rubenstein wrote, “Park models are not recreational vehicles for purposes of land-use planning, and the staff erred in finding otherwise.”

He added that crowding the cottages together with 120-gallon propane tanks next to each unit posed a significant fire danger.

“The absence of setbacks and other standards that are conventionally applied to high-density residential developments substantially increases the likelihood that once the unit is substantially involved in a fire, nearby decks, cabanas, and park models will ignite as well,” Rubenstein wrote.

He also found the cottages would generate more sewage than typical recreational vehicles.

Other improvements to the property — including construction of 30 recreational sites without water and sewer, a cabin, a workshop and a restaurant — will require approval by the U.S. government because some of the development falls on federal land, Rubenstein wrote.

Referring to the website of Nor’wester Industries Inc. of Washington, which produces the cabins, Rubenstein noted the manufacturer refers to the units as “destination vacation homes” rather than recreational vehicles.

Glenn Munsell, who lives on Hyatt Prairie Road, said he agreed with Rubenstein’s decision but wasn’t ready to celebrate because it could be appealed.

“We’re just kind of waiting to see what happens next,” he said.

Munsell said he had maintained all along that McNeely has built a high-density residential park that goes well beyond the original idea of the resort.

“It’s really not an RV park,” Munsell said. “There are cabins or houses and the density is terrible.”