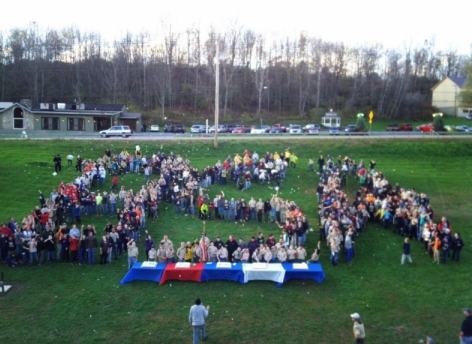 Part of the crowd at the recent Scout gathering at the Herkimer KOA in Herkimer, N.Y.

More than 70 Boy Scout troops and over 1,000 guests attended the Jamboree from New York state, Massachusetts, Maine, New Jersey, Connecticut, New Hampshire and Pennsylvania, according to a news release.

The Herkimer Diamond Mines and KOA Campground have been advocates and supporters for youth education for many years. This year marks the 102nd Anniversary for the Boy Scouts of America, which has created a foundation of leadership, service and community for millions of American youths.

During this event, each Boy Scout participated in a series of educational activities, which included several modules such as Mining Experience; Paleontology & Gemology; Sustainable Energy Sources; Earth Processes; Earth Materials and Water Cycle. In the educational modules a demonstration of specifics from the KOA’s new “Solar Kolony” was offered. The campground’s Deluxe Cabins are packed with “green” technology and products, right down to its recycled metal roof and pulverized glass landscaping.

Both the opening and closing ceremonies were held at the KOA pavilion on Oct. 20. Troop No. 117 from Cicero, N.Y., assisted Shevat in opening the session. Troop No. 818 from Enfield, Conn., assisted with the closing ceremony. Assemblyman Mark Butler; Mike Donaghue, executive director of the Revolutionary Trails Council; and Gene Quadraro, president of Genesis, also assisted Shevat.