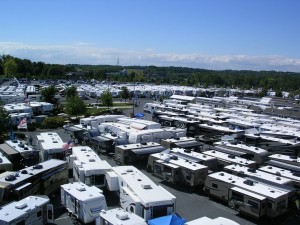 Crystal blue skies provided a fitting backdrop for Wednesday’s (Sept. 12) opening of Public Days during this week’s America’s Largest RV Show, as organizers reported a record gate far eclipsing any first-day attendance for the longstanding event in Hershey, Pa., according to a story posted today on RVBUSINESS.COM.

“We tallied total attendance of 6,485,” said Dan Salzgiver, show chairman for the Pennsylvania RV and Camping Association (PRVCA), which annually hosts the event held on the expansive grounds at the Giant Center. “We thought last year was great when we had 5,057 attendees. We’re looking at a 23 percent increase over those numbers. It just never stopped. At 11 a.m. the line was back across the bridge into the Giant Center and into the parking lot.”

Salzgiver said that the show, which kicked off Monday and Tuesday with Industry Days, was not only attracting strong numbers but also generating sales for the approximately 100 rolling stock dealers and the host of suppliers manning the indoor exhibits at the Giant Center. Prior to the show, PRVCA Executive Vice President Rebecca Lenington reported that over 1,000 RVs would pack the outdoor display area.

“Dealers have been telling me that sales were going great,” Salzgiver said, adding, “Everyone I talked to was very upbeat.”

In addition to “perfect weather,” Salzgiver attributed the overflow crowd to a heightened promotional effort by PRVCA. “We spent more money on advertising than ever before – including social media like Twitter and Facebook – along with running billboards across Pennsylvania that went up around eight weeks prior to the show,” he said.

Salzgiver said another factor behind the record numbers was the Hershey Show’s standing among RVers as “the place to come and see what’s new in the industry.”

“I have talked to a lot of people, and it was apparent that Hershey has evolved into the perfect venue for people shopping for a new RV,” he said. “It’s just grown year after year. They’re not just coming from the Pennsylvania region, but all parts of the U.S. and Canada. And they come to buy. I heard that a lot of people that had bought during a previous show were back to purchase again, so we’re getting repeat Hershey Show buyers.”

The show runs through Sunday and Salzgiver is looking a continuation of opening day. “The weather forecast is great,” he said, “so I don’t see a major slowdown in traffic. We are looking to add to those record first-day numbers.”