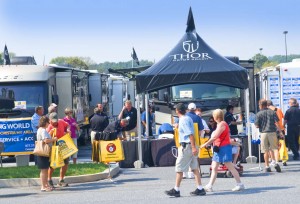 Overcoming media reports of widespread flooding, the 43rd Annual Pennsylvania RV and Camping Show in Hershey saw steady traffic as the public days opened on Wednesday (Sept. 14) while event organizers reported that today’s gate  was on track for an even stronger showing. The event is set to run through Sunday at the expansive GIANT Center.

“The first two days we had a total of about 8,500 people,” Becky Lenington, executive vice president for the host Pennsylvania RV and Camping Association (PRVCA), told RVBUSINESS.com late this morning. “We were fighting the national media which was reporting that we were under water. But it seems that word has gotten out that everything is OK. We have really seen a strong turnout this morning and it looks like we’re going to compensate for the past two days.”

Lennington noted that with some of the surrounding areas experiencing water problems, the GIANT Center had increased overnight parking at the facility to help accommodate visitors.

A shift in the weather may also have accounted for the uptick in attendees. “We saw some rain on Wednesday and Thursday, but today the sun is shining and it looks like the rain will stay away for the rest of the show,” said Lennington.

The Hershey Show, long touted as the industry’s largest consumer show, is regarded as a bellwether for the industry as manufacturers and dealers use it as a platform to introduce new product. 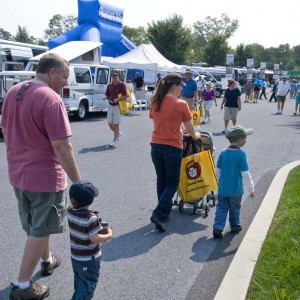 Hershey Show sponsors expect show traffic to pick up over the weekend. Photo courtesy of RVBUSINESS.com.

“We have over 1,050 brand new RVs on display for individuals to purchase,” said Heather Leach, marketing and education director for PRVCA. “There have already been some sales and a lot of the purchases were motorhomes.”

Leach reported that the vendor booth space was sold out with over 218 companies represented on site. “We have the vendors set up throughout the GIANT Center, including the concourse area and the lower level. All of the RVs are set up outside on the parking lot.”

There are also hourly seminars each day, beginning at 10 a.m. and running until 7 p.m., that have been well attended, according to Leach.

“We’re very pleased,” she said, “and with good weather predicted for here on out we’re looking for another great show.”