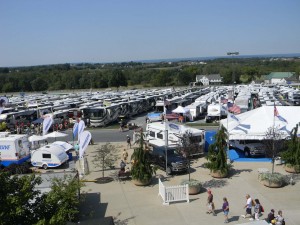 RVs line the Giant Center grounds at the Hershey Show

Robust attendance and strong sales marked this year’s edition of America’s Largest RV Show as the host Pennsylvania RV & Camping Association (PRVCA) welcomed 43,131 attendees – an all-time record for the longstanding event – to the sprawling grounds at the Giant Center in Hershey, Pa. Following Industry Days, which ran Sept. 10-11, 6,485 people poured through the gates on the opening of Public Days, offering notice that this year’s show was going to be special. “This year, we had record numbers almost every day,” said Heather Leach, marketing and education director for PRVCA, noting that last year’s total attendance reached 33,407 despite heavy flooding the week prior. “Saturday was phenomenal, and was by far a record-setting day.” The show, which ran through Sept. 16, annually stands as a harbinger for the industry heading into the fall. Widespread reports from dealers and manufacturers indicated that people were in a buying mood. Forest River Inc. President and CEO Pete Liegl noted, “The Hershey Show was a barn-burner. Forest River did phenomenally well in selling virtually hundreds of units.” Dan Saltzgiver, show chairman for PRVCA, also gave a strong review, stating, “Dealers have been telling me that sales were great. Everyone I talked to was very upbeat.” PRVCA reported that over 1,000 units were on display in the outdoor grounds at the Giant Center. There was also a strong showing during Trade Days, which featured a full roster of seminars and workshops. “The show is truly a unique selling environment because it draws a mix of industry people and retail consumers,” said PRVCA Executive Vice President Rebecca Lenington. “That hybrid format lets manufacturers not only intermix with dealers, but also get feedback from the end buyer.”