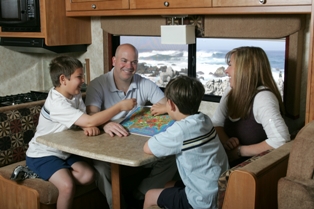 The Herzog family plan their next trip.

A California couple who travel across the country in an RV will be stopping by Hannibal, Mo., this weekend.

Author Brad Herzog and his wife, Amy, have traversed the country for 13 consecutive years, and he has written three memoirs from these travels.

Herzog spoke to The Quincy (Ill.) Herald-Whig earlier this week from the parking lot of the Clinton Presidential Library in Little Rock, Ark., as the couple makes their way to the area. Other locations the couple has traveled to this summer included the Great Sand Dunes in Colorado, the Grand Canyon and the Oklahoma City National Memorial.

“It’s like a big-screen movie of America is playing in front of you, and anytime you want, you can stop the film and enter the picture,” he said. “That’s a really cool feeling.”

The Herzogs should arrive in Hannibal this weekend just in time for the national fence painting contests on Sunday (July 8) at the National Tom Sawyer Days.

Herzog said he is expects to spend a lot of time in Hannibal, which excites him because it was home to Mark Twain.

“As a traveling author, it’s inevitable that I would be a Mark Twain fan,” he said. “So we’re going to take a riverboat on the river, visit the museum and (Twain’s) boyhood home and that sort of thing.”

Herzog boasts the benefits of traveling in an RV, instead of air travel.

“With an RV trip, you’re not going from point A to point Z,” Herzog said. “You’re hitting all the points in between, and it helps immerse you in a sense of place. It makes the destination that much satisfying.”

A RV vacation also could save families money when planning vacations.

A study prepared for the Recreation Vehicle Industry Association (RVIA) found that RV travel is 23% to 59% less expensive than other types of vacations for a family of four.

“The money that we save not having to pay for hotel rooms, by not having to eat three meals a day in a restaurant, by not having to deal with airlines and all the lack of control you have there, it really adds to the whole experience,” Herzog said. “The affordability is one part, and there is the flexibility. I love the fact that in an RV, you’re in control. You’re traveling at your own pace and on your own terms, and to me that is how a vacation should feel.”

The family sees many different towns and locations along the way to their destination. The treks last usually last six to eight weeks every summer, and most times they travel with their two sons. However, they are both at summer camp.

“It started in the summer of 2000,” he said. “The first summer it was my wife Amy and I, and she was pregnant with our first child.”

The Herzogs have since logged more than 100,000 miles crossing the 48 states in the continental U.S.

Herzog’s latest book, “Turn Left at the Trojan Horse: A Would-be Hero’s American Odyssey,” explores classically named towns throughout America. He focuses on small towns in America in his writing.

“Hannibal and Quincy are humongous compared to what I write about,” he said. “I pick the tiniest dots on the map, and I sort of develop a theme for an overarching concept I would like to explore in each book. Then I craft an itinerary that’s going to take me through tiny little towns with names that match that theme.”