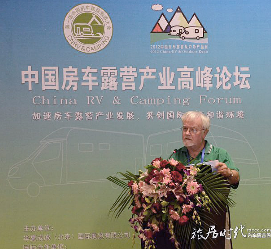 Al Hesselbart, RV/MH Hall of Fame & Museum historian, curator and librarian, recently returned from an historic trip to Beijing, China, where he one of the keynote speakers at the 1st National China RV Rally. According to a press release, Hesselbart spoke to a large crowd on the America’s RV history and evolution.

“I was tremendously honored to be invited to speak at this historic event,” Hesselbart said. “My thanks go out to the Recreation Vehicle Industry Association (RVIA) for referring me and to the China Tourist Bureau and the First National China Rally Organizing Committee for making me feel welcome.”

According to Hesselbart, the show’s promoters described the event as a rally, but he noted it was unique by American standards.

“The rally which was held in conjunction with the 15th FICC (Federation International des Camping and Caravanning) rally was truly an international event,” he said. “It was attended by representatives of the RVing associations and industry from countries around the world. Germany, Italy, Netherlands, Korea, Japan and more were represented and most of them referred to the USA as the most active RVing country, the U.S., however, was noticeably absent on both sides, consumer and industry, with a few US products displayed by Chinese distributors.”

Hesselbart observed in several presentations that the Chinese unit balance is over 80% motorized and 15% to 20% towable including both tent campers and travel trailers. He noted, “No fifth-wheel units were shown. Chinese highway laws limit trailers to no more than 8 meters (25 feet) in length so the trailers, as well as the motorized units, were small by U.S. standards. The most prevalent brands of imported units were Hobby and Fendt from Germany as well as a few from Landhaus and some Isuzu-based motorized rigs.

“The motorized units were primarily small diesel units built on Mercedes and Isuzu chassis with a note that Fiat chassis had previously been used but are politically banned from import to China at this time. The towable units showed a wide variety of design from some unique folding campers, through teardrops, and conventional travel trailers.”

The largest RV shown was a Jayco Melbourne Class C on a Ford chassis. It was the only motorized unit noted to have an automatic transmission, the Chinese favoring manual shifting on their vehicles, according to Hesselbart.

Hesselbart concluded, “In my opinion the event which was held at the Xiedao Resort in September, was very well run, and Millian Hu and Sarah Song, the rally organizers, are to be congratulated on a job well done.”