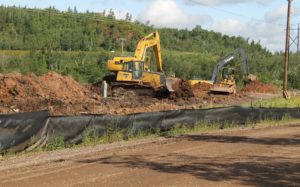 Construction on the new Black Beach Campground along East Lakeview Drive in Silver Bay, Minn., is well underway as of Aug. 27.

The Silver Bay (Minn.) City Council tabled a vote on bids received for the second phase of the Black Beach Campground construction Monday (Sept. 16), after bids came back higher than expected, according to the News Chronicle.

The second phase of the Black Beach Campground construction project entails the construction of the office and shower building and a picnic shelter. The project was budgeted for a total of $550,000. Of the two bids received for the building alone, the lowest bid was $664,000, around $109,000 over budget.

Joe Rhein, on behalf of city engineering firm Bolton and Menk, presented the council with the bid report and some options the city could take to lower costs.

The picnic shelter construction has been shelved for now. Rhein also found some savings from the first phase that shaved down costs by around $30,000, making the difference closer to $80,000.

Rhein said the campground committee explored a few architectural changes to the plans that could reduce costs, like eliminating a staff bathroom and one of the four shower units. These reductions would also change the scope of the building enough that it would likely have to be re-bid.

If the project has to be re-bid or postponed until spring, the building would not be ready for the opening set for May and temporary measures would have to be taken to provide showers and office space.