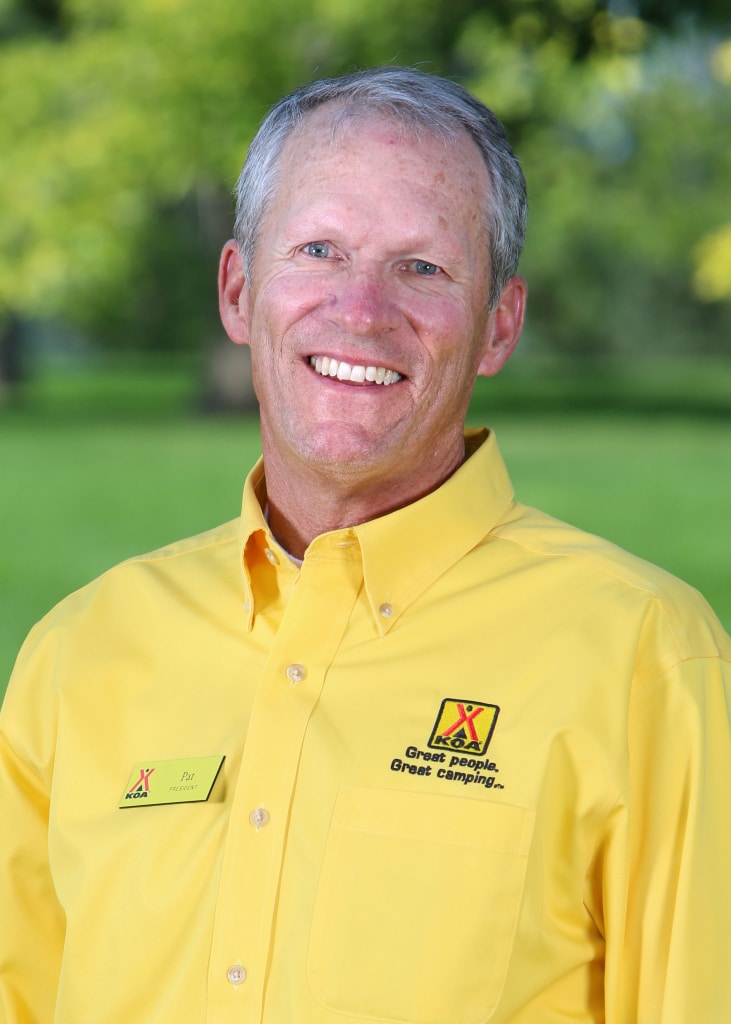 After 38 years with Billings, Mont.-based Kampgrounds of America Inc. (KOA), Pat Hittmeier has decided to retire, leaving the company in the hands of Toby O’Rourke, who has been with KOA since 2011. Hittmeier plans to stay on as a consultant.

Hittmeier served KOA in a variety of capacities throughout his more than three-decade career, working with both company-owned properties and with franchisees. He became COO in 2009 and was promoted to president of the company in 2010, before taking over as CEO in 2016 after the retirement of Jim Rogers, who had led the company since 2000.

Before KOA, Hittmeier said he had been moving from one place to another. A degree in forestry from Southern Illinois University allowed him to work with the state of Montana’s Division of Forestry and he had also served as athletic director for the city of Waco, Texas.

“The last thing I was doing, it really had no connection at all to outdoor recreation, was in lumber wholesaling,” he noted. “The company had gone bankrupt and I was selling off the assets. That’s maybe where they got the idea that I could come in and just take down some of the projects that weren’t working at KOA and sort of get rid of them.”

Married for 35 years in April, Hittmeier also has three children and says there are a lot of activities he is looking forward to tackling while being retired.

“I plan to engage myself and put myself out there a bit,” he explained. “I plan to enjoy more recreation, like hiking, fishing and boating. I also have a whole list of projects that have been ignored for the last 20 years.”

Woodall’s Campground Management (WCM) spoke with Hittmeier about his career and the evolution of how KOA developed into the company it is today.

Below is our edited conversation.

WCM: How have KOA and campgrounds in general evolved over your career? How are they maybe different now then when you first joined KOA?

Pat Hittmeier: I think most campgrounds are operated more professionally than they were 35 years ago. There’s more technology at play and more good business practices occurring. There’s certainly been an aggregation of smaller properties, of what would be traditionally mom and pop operations, or family-owned businesses purchased by larger players, both private and public.

Owners are savvier today about how they connect and market themselves. There’s really a truth in the belief that it’s never good enough. You crave a nice experience and that works for a while, but you can’t sit there and expect that same quality and level of experience to draw the same kind of business that it will 20 years from now. You have to keep improving and the more you improve, the more people want and the more they expect.

You never get to a point where your campers say, ‘Wow you’ve done exactly as much as I’d ever want here.’ It never ends. And so, I think that the camping industry understands that and works hard to try to provide the experiences that the customers love today, which is much more than what customers wanted 35 years ago.

They expect a park that is modern, professional, clean, with better execution and sites. They’re not okay with things that don’t work.

WCM: Reviews have become so important for owners to track, how has collecting customer data improved over the years and how is that beneficial to owners in today’s market?

Hittmeier: I feel like an old man, but when I first started, we had little boxes at each campground where campers could fill out a form and place their comments. We also had people writing us letters and giving us their thoughts. Sometimes those letters would be three to four pages of information. People didn’t call, it was too expensive. That suggestion box was the closest thing that an owner had to get feedback right away and any changes were made well after the fact.

Not nearly as many people commented because it was more difficult, now more do because it is easier. As an owner/operator of a campground you’re more able to respond quickly, in season, to make any changes, and to see issues where you may not have noticed before.

The problem of course is being inundated by comments from your customers and being able to mentally handle all of those responses. That is something that entrepreneurs today have to be able to manage and I find that some can do it very well, others have a terrible time with it, because the minority that is causing issues or complaints becomes so overwhelmingly influential about how that owner feels about the feedback. In reality, you need to be able to see the bigger picture of all of the people that are commenting or showing you things and be able to take those people, the small amount who have the criticisms, and look at them from a business perspective and not personally. It’s really a challenge I think for campground owners to be able to do that.

WCM: KOA has been seeing some impressive growth over the last few years. Where do you see the company, the franchise-based model, heading into the future?

Hittmeier: I think the future of camping in general is very positive. We will have downturns, we haven’t had one in a long time, but it will happen. But in general, I think that the desire to go camping has not lessened and won’t lessen in the future, so you’ll do well in this business if you are positioned correctly.

What does the future hold for KOA? You know, it’s focusing in on what we do best. The support of our franchisees, the technology that provides the support operationally and marketing, those are the keys. And being able to improve the overall quality of our parks and the reputation of the brand. We have a lot of momentum there, and so being able to make sure that continues moving forward in a positive way, you can’t let your foot off the gas. Toby will do an amazing job with that.

And then on the other side of the coin, concerning properties, there is so much opportunity for improvements that can be made on these properties that will gain great returns. Plus, finding new properties to purchase. We don’t buy a lot, but the ones we do buy I think are good purchases and because we operate them with the goal of high-quality and long-term ownership, we can make a big difference.

And we’re also focused on the aspect of trying to develop a glamping model. We’ll see where that goes. I have high hopes that we’ll be able to create an offshoot of our company properties, where we can build these glamping experiences, because they are quite different than our RV parks.

WCM: You have begun to develop a relationship with the RV Industry Association and have just showed off your “Campground of the Future” display at RVX. Why is that relationship so important and how does it continue to develop?

Hittmeier: We both serve the same customer and any time that you connect with reputable organizations that service the same customer, only good things can come from it. We both rely on each other and it is important to stay connected because of that.

Look for the rest of this Q&A in the May edition of Woodall’s Campground Management.