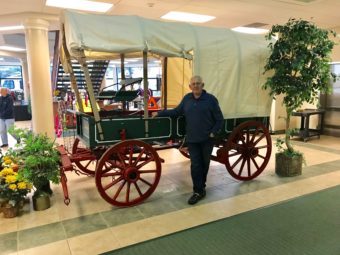 Bill Thomas, owner of Bill Thomas RV, in front of the Conestoga wagon donated to the Hall of Fame.

Two new additions have been added to the museum collection at the RV/MH Hall of Fame (RV/MHHOF), including a Conestoga-style wagon and a motorhome called “Eagle One.”

“The old wagon has been restored to a beautiful condition and we believe it to be circa 1885,” said Darryl Searer, president of the RV/MH Heritage Foundation Inc. “The Eagle One is a tribute to the Philadelphia Eagles football team.”

Searer related that the 2006 Philadelphia Eagles-themed, 40-foot, diesel-pusher motorhome was donated by Patrick Moeller, an Eagle fanatic named who saw all but two games — home and away — in the $300,000 coach. Searer noted that the “Eagle One” is a derived from “Air Force One.” (A full YouTube profile of the coach and its owner is available by clicking here.)

“He said when they won the Super Bowl he was going to donate it to charity,” said Searer. “So, he donated it to us just about a month ago and it was delivered yesterday. We already have it on display in the museum — a very exciting example of the sporting, tailgate tradition.”

“It was in his family for over 70 years tucked away in his great uncle’s barn,” he said. “It was all in parts with the box sitting on top for the axles and the wheels. When the uncle passed, Bill Thomas was willed the old relic and had a guy working for him that did restoration work on this kind of project.”

“The wagon is in great shape and we have it on display next the to the gift shop,” concluded Searer. “And the ‘Eagle One’ is also here in the museum.”