It has been a hot, dry summer for most of Oregon and unfortunately that has meant wildfires have been a huge issue for most of the state.

The National Integrated Drought Information System has placed most of Oregon in a short term “moderate drought” pattern, with the southern portions of the state seeing “abnormally dry” conditions. Oregon is also suffering through its 3rd hottest summer on record, according to the National Weather Service, giving the wildfires plenty of fuel to burn.

Bruce Smith, a freelance journalist who lives in Eugene, told Woodall’s Campground Management (WCM) that the winds have shifted and given the city a break from the smoke that had plagued them a few weeks ago. He said that conditions are so dry in some parts of the state that residents are being told not to run lawn mowers or chainsaws for fear of sparking another fire.

“A few weeks ago our air quality was listed hazardous for multiple days,” he said. “Visibility was down to less than a mile.”

According to The Oregonian, numerous wildfires across the state on Wednesday (Sept. 13) were still actively growing. The Chetco Bar Fire, the state’s largest wildfire, located near Brookings, has burned nearly 200,000 acres and is only 8% contained.

Officials are working on containment lines, hoping higher humidity over the next few days will keep fire activity low.

The High Cascades complex fire, east of Roseburg and Grant Pass, has burned nearly 100,000 acres and is only 28% contained, while the Whitewater fires, in the Mount Jefferson Wilderness, have burned over 13,000 acres and is 35% contained.

At Sea Bird RV Park, in Brookings, just 20 miles west of where the Chetco Bar Fire is burning, Jeff Meyers, manager of the park, said that they have been at a level two evacuation order for the last month, meaning residents are being told they may have to leave at a moments notice. 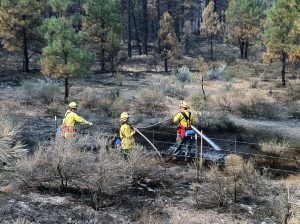 “The smoke has cleared now, but for awhile it was pretty terrible,” he told WCM. “One day you could only see 50 yards, it literally stopped traffic. We were told to seal up our houses and stay indoors.”

Still, Meyers said that business at the RV park has not dipped that much and is picking back up since the winds have changed and driven the smoke out of the town. Offering 64 RV sites, Meyers said they have only had eight people cancel because of the fire, while 12 residents left the park to go somewhere else.

“The town only has a population of around 5,000 people and the fire has burned 36 times the amount of acreage the small town actually sits on, so I think everyone is a little nervous about where the fire will head next,” he said.

Meyers noted that there are around 1,700 firefighters in the area that have formed their own campsite, he said it is like a small city.

Unfortunately, a recent blog post by the Oregon Department of Forestry indicates that there is still a long way to go before Oregon gets a handle on its wildfire problem.

“Changing conditions and continued scarce firefighting resources will contribute to increased levels of fire danger this upcoming week,” stated the agency in a Sunday, Sept. 10, posting. “Therefore, the message for Oregonians continues to be please do everything possible to prevent human-caused wildfires, including following fire restrictions when out in Oregon forestlands.”

Smith said areas of the state have also been impacted by smoke coming from fires in British Columbia, Canada and in the state of Washington.

“Everything about this has just been devastating, as far as what is being burned” he said.

Meyer just hopes the smoke stays away for good.

“They have created around 14 miles of fire breaks and are working to do more,” he said. “We are all just hoping the wind direction doesn’t change.”