Houston Still In Recovery Mode A Year After Harvey 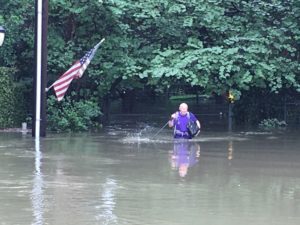 Bill White’s neighbor captured this image of him evacuating his home during Harvey.

It’s a hypermodern skill, the ability to spot a viral moment in the face of strife. As Hurricane Harvey beat down on Houston, there was former Mayor Bill White, inching his way through waist-deep water, hiking staff in his right hand and laptop-stuffed briefcase tucked like a football in his left. And there was his neighbor, who, while waiting for White at the water’s edge, couldn’t resist a snapshot, according to The Atlantic.

The photo — a prominent Houstonian weathering the storm, his gated home behind him — came to symbolize the equal-opportunity devastation of Harvey. It was a year ago that Harvey gutted hundreds of neighborhoods across the city, from upscale Kellywood to working-class Homestead. The blistering post-2016 news cycle ensured the storm would shrink from headlines after a few weeks. But to visit Houston is to absorb that, for an untold number of residents, the biggest rainstorm in the history of the continental U.S. continues to replay like a nightmare on loop.

For White, Hurricane Harvey began on Friday, Aug. 25, 2017. Houston is no stranger to heavy rains, and neither is White: As mayor from 2004 to 2010, he governed the city through Hurricanes Katrina, Rita, and Ike. No small storms, yet as White monitored the news that day, and early rainfall projections began to rise from 20 inches, to 25, to 30, he realized this one was different.

“When the estimates of the rainfall amount … went out of the range of anything that had been projected to me, had ever been viable when I was mayor,” he said, “I realized that it was going to be pretty bad.”

White’s home sits just above the 100-year floodplain on Buffalo Bayou. It’s built up on stilts so flood water can flow underneath. Yet in White’s 19 years of living there the bayou had never swelled to such an extreme point.

That changed Sunday morning, when White awoke to a “murmuring sound,” like a river. It was water rushing beneath the house. He spent the next few hours moving what furniture he could upstairs, keepsakes and family photos into the attic. A recent tennis partner called, distraught: A close friend had died the night before, she told him, when she’d taken an off-ramp on the interstate and gone underwater. “I knew then that there was going to be lot of human tragedy,” he told me.

The water continued to rise. By noon, it had made the 10-foot climb to the deck. Touching the bottom layers of the house, the current had shifted from the almost pleasant rhythm of a river to a “rumbling sound, like a train.”

“It was an eerie sound,” White recalled. “I was surrounded by moving water on all sides. It was like being on a boat.”

In two days, Hurricane Harvey dumped 51 inches of rain on greater Houston. More than 75 people died in Texas. Of Houston’s 50 victims, most died by drowning.

The catastrophic event has prompted an existential crisis of sorts in Houston. Almost every recent administration, including White’s, has made flood mitigation and relief a top priority. With each year comes newer technology, more sophisticated takes on infrastructure, and a deeper understanding of the threats posed by global warming. Yet Harvey has brought the question of Houston’s flood preparedness into sharp relief. For a city looking to outpace Chicago as the third-largest city in the country it’s an unenviable position to be in. In the past year, Houston officials have thus scrambled to probe what went wrong, and what went right, in the lead up to Harvey, all the while attempting to rebuild the homes and lives of those displaced.

The city of Houston and Harris County have responded aggressively in the past year. Houston has already amended its building code to require higher structure elevations in the floodplain, while Harris County has placed a $2.5 billion flood-mitigation referendum on the ballot.

But the more the city and county take on, the clearer it becomes that federal intervention is needed to shore up the sprawling metropolis, home to the largest medical center in the world and a significant concentration of the nation’s oil refineries. And with record federal deficits, along with a never-ending stream of stopgap funding bills in Congress, the kind of help Houston needs is almost certainly not on the way.