How Ocean Lakes Founders Got Named to Hall of Fame 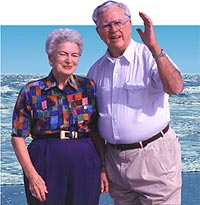 When longtime RVer Scott Thompson checked out the RV industry’s national Hall of Fame a few years ago, he couldn’t rest until two Myrtle Beach, S.C., pioneers had their pictures on that wall.

Thompson, a Bennettsville resident who has stayed at Ocean Lakes Family Campground several times a year since 1997, immediately thought the campground’s founders, Nelson and Mary Emily Jackson, should be part of that elite group, MyrtleBeachonline.com reported. He started putting together the nomination, working with other campers and the campground’s staff to compile and submit the already long list of accolades for the property and the couple who built it.

“Well, the Jacksons did a lot and are deserving of it,” Thompson said. “They did a good job at what they did. They did the right thing at the right time.”

Turns out the Jacksons, as Thompson predicted, were shoe-ins for the Recreational Vehicle and Manufactured Housing Heritage Foundation’s Hall of Fame, tapped by an eight-person panel of industry experts who were impressed that a husband-and-wife team had the forward thinking to grow Ocean Lakes from a small campground into a massive one that has evolved into way more than just a place to park your RV.

“What they did in creating and then building Ocean Lakes into one of the giant RV parks in the country was just very unique for a family, not a corporate enterprise,” said Al Hesselbart, the association’s historian. “When their nomination came in – it was just an amazing contribution to the RV world.”

The Jacksons, both of whom died in 2010, are among 10 inductees this year picked from about 50 nominations. They are the first Grand Stranders to join the roughly 350 members in the Hall of Fame, and only the second inductee from South Carolina, the other from a now closed campground in Columbia, Hesselbart said.

The Jacksons, along with the rest of the 2012 class, will have their picture added to the Hall of Fame in Elkhart, Ind., during a ceremony in August at the 85,000-square-foot complex, which also features a library, museum and RV relics.

This is the 40th anniversary for the Hall of Fame, a milestone Ocean Lakes marked last year. The oceanfront campground debuted in 1971 with 30 campsites and one bathhouse and has evolved into a complex with more than 3,000 sites on 300 acres that can host as many as 30,000 people a day during the height of the summer tourist season. Having the vision to grow the park was one of the things that impressed the Hall of Fame judges, Hesselbart said. 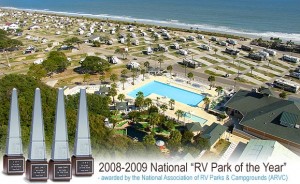 “It just kept growing and growing,” he said. “It was just a story of their success. Being fantastic at what they did.”

The Hall of Fame is the latest group to honor the Jacksons and Ocean Lakes, which has accumulated awards through the decades including National RV Park of the Year five times and the South Carolina Governor’s Cup for its economic impact on the state.

“They really have been pioneers in this industry,” said Barb Krumm, spokeswoman for Ocean Lakes. “So many people look up to what they did.”

While the campground’s growth impressed the judges, it was the Jacksons’ personalities and involvement that have kept some Ocean Lakes’ guests coming back. They remember seeing the pair around the campground, chatting with guests and active in the operation.

“He was a people person, and she was a typical Southern lady,” said Barbara Wood, who had vacationed at Ocean Lakes since it opened but now lives there and helped Thompson with the nomination. “I have respect for them and what they have been able to do. We just felt they needed to be in [the Hall of Fame].”

Wood and others agree that the Jacksons would be humbled by the Hall of Fame honor. The nomination was sent before they died, and Thompson and others wish now that they hadn’t kept it secret, wanting to wait until they received word on whether the Jacksons got in before telling the couple about it.

“We didn’t say anything to them about it,” Thompson said. “Maybe that was a wrong choice. I kind of feel bad about that.

“I wish they could have seen it happen.”

Ocean Lakes Family Campground was built by Mary Emily and Nelson Jackson, along with their five daughters, starting in 1970. On July 2, 1971, Ocean Lakes opened with 30 campsites and one bathhouse. Nelson Jackson was 50 years old at the time. “People were lined up outside the gate by the hundreds and we were clearing spots for their campers as fast as they could park ‘em,” he explains with a smile.

Today, Ocean Lakes features 893 campsites and 2,554 annual lease sites on 310 oceanfront acres with nearly one mile of beachfront, four bathhouses, and more than 360 employees in the height of the camping season. It is the largest campground on the east coast and one of the largest in the United States. On an average seasonal day Ocean Lakes has 25,000 – 35,000 guests enjoying the countless amenities that have made it a local favorite and a national vacation destination. “We could do a lot of things with 310 oceanfront acres in Myrtle Beach, and we’ve had many lucrative offers, but we believe that everyone – the butcher, the baker and the candlestick maker – should have the privilege of enjoying God’s beautiful ocean,” explains Nelson Jackson, during an interview when he was 88. 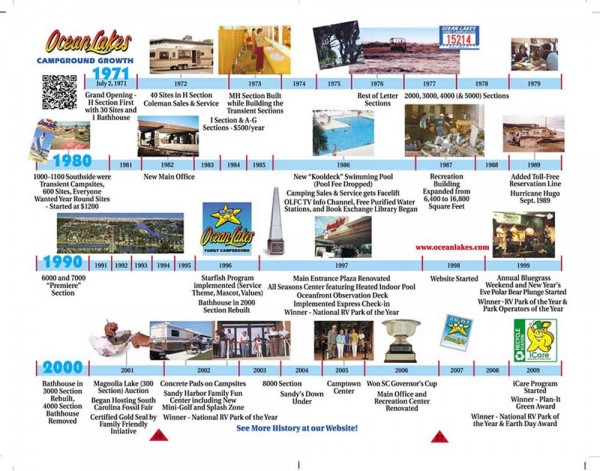