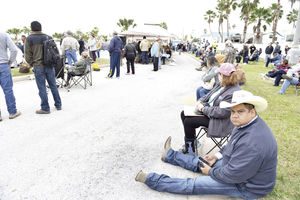 Hundreds of people wait for their ticket number to be called for a chance to reserve an RV lot for rent Monday morning at South Padre Island.

Toward the end of last year, Cameron County Commissioners Court ended a decades-old policy at the parks that allowed RV enthusiasts to essentially endlessly renew reservations for pads in the parks, according to the Valley Morning Star.

Now, summer reservations for each year will open up starting on Jan. 15. Reservation requests had been on hold since last May, which irked many longtime park-goers.

Andy Hernandez, of Rio Grande City, said he showed up Sunday night at 7 p.m. to get in line. However, that line was unofficial, and law enforcement dispersed it.

“ They kind of decided to form their own line and made their own tickets,” Cisneros said.

Hernandez was one of those in the unofficial line.

“ We were all organized but for some reason the cops told the people that this is an unofficial line,” Hernandez said.

Cisneros said there were some people who were unruly and on Monday morning, the head lifeguard had to check out a couple people who were overwhelmed, but said nothing was serious enough to warrant calling an ambulance.

For Hernandez, though, his grin was ear to ear Monday morning. The wait was worth it.

“ It’s the reason we were here early. There was no way we were going to miss out. It was worth the wait,” Hernandez said. “And we were lucky that we were the first ones in line.”

Hernandez was one of the first to be issued a sanctioned ticket. By 8:30 a.m. Monday, more than 300 tickets had been issued.

“ I rented a room but when I saw all the people here I let the room go and waited out here in front,” Garza said.

She said she observed pushing and shoving when the gates opened, noting that one man fell down in front of her.

Typically Garza makes her reservations a year before she plans to spend some time at Isla Blanca.

“ I think they’ll be better organized next year,” Garza said.

Cameron County Parks Director Joe Vega said he hopes Sunday and Monday’s long line for reservations is a one-time occurrence. The county barred overnight camping for those who wanted a reservation, but people did not heed that order.

“ Hopefully, we’re going to avoid the situation next year, because we are currently working on an online reservation system,” Vega said.

That could tentatively be ready by April or May, Vega added.