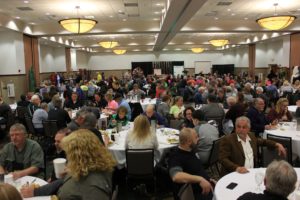 The 2018 WACO convention drew in hundreds.

Widely recognized as one of the marquee events in the campground industry, the 2018 Wisconsin Association of Campground Owner’s (WACO) 2018 Convention didn’t disappoint as it attracted several hundred attendees from more than 125 campgrounds in Canada and eight different states, plus nearly 200 vendors in the trade show portion of the event.

Another conference highlight was the lively sense of camaraderie evident throughout the five-day event – which is by design, said WACO Executive Director Lori Severson.

“We like to make it fun. Wisconsin is really truly about fun, as Stephanie so brilliantly said,” Severson told Woodall’s Campground Management (WCM). “We do try to make it fun for the vendors and for the campground owners.”

One of many examples was “The Price is Right,” a romping spoof of the daytime television game show in which campground owners purchased tickets for a chance to win the “Showcase Showdown.” Playing the role of Bob Barker/Drew Carey was Bud Styer, an ARVC and WACO board member, campground consultant and owner of Smokey Hollow Campground in Lodi, Wis., and the first contestant to “come on down” was WACO Board President Scott Kollack, owner of Vista Royalle Campground in Bancroft, Wis.

During the conference, Kollack was recognized for his service as president with a special award from Severson. Similarly, WACO’s 2018 President’s Award was presented to Judy Buchta, who, with her husband Tom, was a longtime owner of Duck Creek Campground in Pardeeville, Wis., as well as an active member of WACO.

“She is just a perfect example of what being a member of an association is all about,” Kollack told WCM, adding Buchta was on the WACO board for about 20 years, including serving as its president. 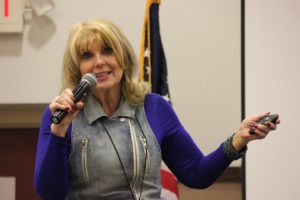 As always, the conference featured a number of auxiliary events and activities and programs, including a very popular kid’s camp that not only keeps the children of campground owners entertained, but involves them in conference activities as well. In fact, the kids performed “skits” as commercials during the Price is Right.

In acknowledging the conference’s success, Severson attributed it to a team effort by her staff, campground owners, vendors and an army of volunteers.

“And we really do steal shamelessly from all of the other state campground association executives – we all work together really well,” she said. “We do a lot of sharing of vendors. I do some funky things. Obviously we go to all kinds of other trade shows in search of new vendors. So, we try to get at least 12 totally different industry products, that’s kind of key.”

Severson added that the timing of the conference right before the camping season begins allows campground owners to order the supplies they need from the vendors at the trade show.

In fact, Severson said they “go out of their way” to make sure attendees do business with the vendors and that they genuinely feel appreciated.

“We know what it is to work a show and we also know that we couldn’t do any of this without their support, they literally put on this show,” she said. “So, they’re important to us. So we make sure that they have their little goody bags, that they join us for meals and that kind of thing. Gets them to feel more like part of the family.”

Vendors told WCM they appreciate the effort and make sure to come to the conference every year.

“I travel around a lot and I go to lots of state shows, and this is probably the best-run state show out there – and I hate to say that because I don’t want to disparage other states,” said Leo Manley of CheckBox Systems LLC, a Wi-Fi systems provider based in Gray, Maine. “Lori just has a way of doing things around here. It’s just such a well-run state. It’s worth the trip for me as a vendor and as a person.” 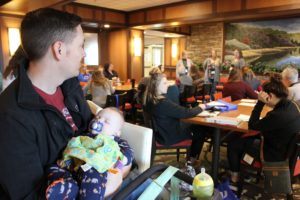 “It’s just they put it together so well,” he said. “It’s several days. There’s a lot of information. And there are a lot of friendly vendors that come here. I’ve never seen such a great group and so diverse a group of different suppliers that really track the campground owners. All the campground owners here are just really open to sharing ideas and elevating their operations.”

Joel and Virginia Minton, owners of Deerhaven Campground just outside Stevens Point in Waupaca, Wis., told WCM they look forward to the convention every year because it helps them “recharge their batteries” for the coming camping season.

The husband-and-wife team just added eight new sites to their 51-site campground, which is about 90% reserved for the year with seasonal campers.

“We only have a few sites left, although I do try and keep about five sites open for overnighters,” Virginia said. “That’s where you pick up your seasonals. We always tell them, don’t make a decision until you’ve stayed here for a weekend. That’s when we get them.”