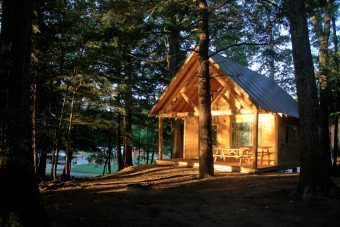 The European “glamping” brand Huttopia was founded in Lyon, France, in 1999 and is now actively making inroads into the Canadian and U.S. markets. According to the company, its first park was opened in North America near Montreal in 2015 with another following in the U.S. in the White Mountains of New Hampshire in June 2017.

The Huttopia concept is a network of more affordable glamping getaways combining camping with rustic tent and cabin accommodations, offering campers the convenience of not having to own an RV or any camping equipment. The French accented Huttopia brand is different from many glamping destinations because there are no RV camping sites mixed in on its properties, according to its founder Céline Bossanne. There are tent camping sites available to pitch a tent, some with electrical and wooden platforms.

“It’s not that we don’t like RVs, but we try to locate our resorts in places that are very natural and beautiful,” explained Bossanne. “We don’t want to create roads or flattened sites. We want to keep the place as pristine as possible — to keep it as though we were not even there.”

The Huttopia experience calls for guests parking in a lot and then walking through the terrain to their sites. There are no cars pulled up right next to campsites.

“People have to walk into their site,” she said. “So, it is safe for children with no traffic. Camping is an experience — it is more than lodging — it is a natural experience.”

The concept of Huttopia came to Bossanne after she spent several years living in Canada and enjoying the wild, remote campgrounds that abound there.

“We very much enjoyed spending time outside and when we came back to France we decided that we loved camping but didn’t know where to go,” she said. “This was the late 1990s and with no Internet, it was very difficult to know where to go to camp. “Campgrounds in France were few, with a lot of people and small beaches, and not that nice for camping. So, we wanted to create something new and different like the North American way of camping.”

As an entrepreneur, Bossanne quickly recognized there was no brand in the campground business space.

“France has a beautiful countryside,” she said. “There are many ways to camp and there is nature everywhere, so people should not have to always go to the same crowded spot. The idea was to create a brand that’s a natural utopia where families can spend their holidays in a campground with nice lodgings and nice architecture in a natural environment.”

Length of holidays is one of the biggest differences Bossanne has observed as she reaches across the pond to create Huttopia in Canada and the U.S. 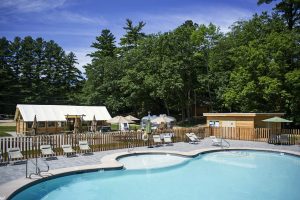 “One of the main things we see that is different between Canada and the U.S., and camping in Europe, is the length of the stay,” she said. “In France we have a lot of holidays. When people go on holiday they stay for a minimum of one week, but mostly two or three weeks. In the states people stay two to five nights. It is not often they stay longer.”

But she also sees great commonality in the human camping experience.

“Everyone, everywhere in the world has the same needs of getting out of the big cities, finding quiet places, spending time with the family and just enjoying simple adventure,” said Bossanne. “We believe sleeping under canvas is a real adventure — especially for your kids. So, in France and in North America we are the same.”

Campers stay in a variety of accommodations at Huttopia. According to Bossanne, the new Huttopia White Mountains resort, hidden away in the woods near Albany, N.H., is a typical example. Four different types of accommodations make up the 100-plus site resort at White Mountains. Each tent in the series is pitched on a wooden platform off the forest floor. Each also has a French moniker. All the sites have a wooden picnic table and a fire pit included.

The Bonaventure is the most affordable and smallest of the tents available at $104 per night. It is perfect for couples with one double bed on a slightly raised wooden platform inside. Bedside tables, lamps, storage and a kitchen area equipped with an electric cooler, cookery and a gas stovetop provide further livability.

The larger Canadienne at $158 per night is a wall tent. With wooden frame poles and flooring it guarantees more protection from the elements and can sleep up to five people. Linens are provided with this and all other upgraded packages. This tent has two bedroom partitions. One room is equipped with a queen bed and the other with three single beds. The main room of the tent has a gas stove, refrigerator, table and chairs, as well as lanterns. The exterior of the tent comes with a wooden terrace, parasol and two outdoor chairs.

The Trappeur is the most popular of the tents because of its full bathroom facilities, according to Bossanne. Starting at $219 per night, the Trappeur is a true glamping tent with a log stove and bathroom that includes a shower, washbasin and toilet. The main room has a kitchen area with gas stove with two burners, fridge, storage, sink, cookery and dining area with table and chairs. The sleeping area is split into a parents’ area with a queen bed and a children’s area with three single beds. The exterior has a wooden terrace.

At the top of the Huttopia lodging chain is the Chalet starting at $297 per night. It features a wood stove in the center of the living room and sleeps up to six people. There are two bedrooms, one on the first floor equipped with a queen bed and another on the second floor equipped with two single beds. The Chalet has a first-floor bathroom with shower, toilet, and sink as well as a living area with a sofa bed, dining area, and kitchen area with a sink, gas cooker, microwave oven, fridge, dishwasher, coffee maker and cookery. 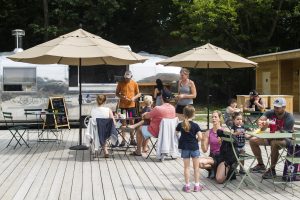 All Huttopia Villages have what is known as the “Centre de Vie” or Living Center. This is a centrally located structure that facilitates all the services and activities in one place.

Bossanne explains, “It’s the place where everybody gathers. We try to put all the services in the same area. You have a swimming pool, a place to have some drinks, a good espresso, even pizza done the French way. We offer some wine. It’s also where people can find all the information about the area.

“In France we have villages with a church, the city hall, the shops, all in the center of the village,” she continued. “And then they can return to their lodgings and enjoy and live simply.”

Bossanne does not really consider Huttopia glamping as defined by the European model. “When we created Huttopia, glamping didn’t exist,” she said. “Glamping in France and Europe is very trendy now. The main difference now is the price. Glamping is very expensive in France. It’s $500 or $600 per night. It is a luxury vacation.

“Instead, we tried to create something different where people can go spend time with their kids,” Bossanne continued. “Not only one or two nights, but spend real vacations and go there more often. We want it to be an affordable a way to disconnect from the day-to-day life and to find a way to reconnect with their family and with nature.”

Bossanne shared that her company is doing very well.

“We had very nice growth last year in France. It was a very good year and it feels like it is going to be the same this year,” she said. “Now we want to focus on North America. We think Huttopia is different and we hope people will like it. We were originally inspired by the spirit of North America and now we are putting a French touch on the experience.”