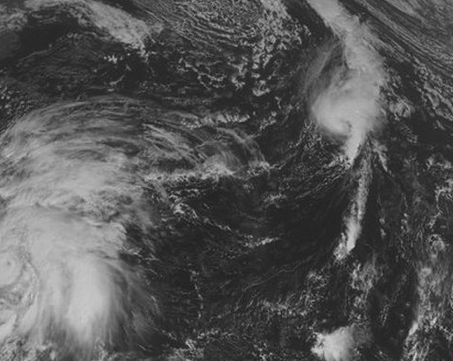 Satellite view of Hurricane Sandy as it swirls over the Caribbean Sea.

Much of the U.S. East Coast has a good chance of getting blasted by gale-force winds, flooding, heavy rain and maybe even snow early next week by an unusual hybrid of hurricane and winter storm, federal and private forecasters say.

Though still projecting several days ahead of Halloween week, the computer models are spooking meteorologists. Government scientists said Wednesday the storm has a 70% chance of smacking the Northeast and mid-Atlantic, the Associated Press reported.

Hurricane Sandy in the Caribbean, an early winter storm in the West, and a blast of arctic air from the North are predicted to collide, sloshing and parking over the country’s most populous coastal corridor starting Sunday. The worst of it should peak early Tuesday, but it will stretch into midweek, forecasters say.

“It’ll be a rough couple days from Hatteras up to Cape Cod,” said forecaster Jim Cisco of the National Oceanic and Atmospheric Administration (NOAA) prediction center in College Park, Md. “We don’t have many modern precedents for what the models are suggesting.”

It is likely to hit during a full moon when tides are near their highest, increasing coastal flooding potential, NOAA forecasts warn. And with some trees still leafy and the potential for snow, power outages could last to Election Day, some meteorologists fear. They say it has all the earmarks of a billion-dollar storm.

Some have compared it to the so-called Perfect Storm that struck off the coast of New England in 1991, but Cisco said that one didn’t hit as populated an area and is not comparable to what the East Coast may be facing. Nor is it like last year’s Halloween storm, which was merely an early snowstorm in the Northeast.

This has much more mess potential because it is a combination of different storm types that could produce a real whopper of weather problems, meteorologists say.