‘Ida’: More Than 1 Million People are Without Power 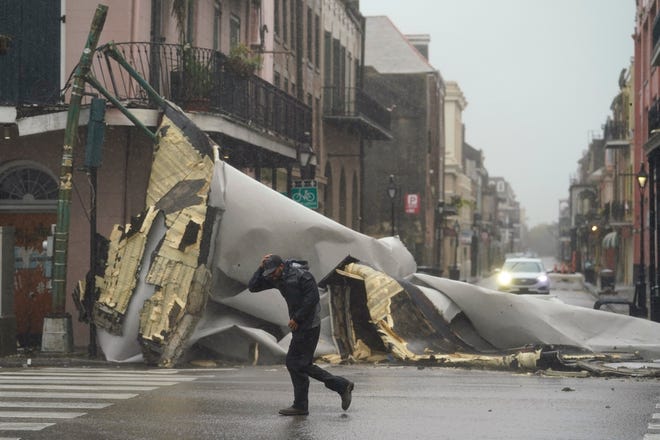 A man passes by a section of roof that was blown off of a building in the French Quarter by Hurricane Ida winds, Sunday, Aug. 29, in New Orleans. Eric Gay, AP

Louisiana residents may be in the dark for weeks as officials take stock of the damage from Hurricane Ida, according to the BBC.

Ida made landfall on Sunday (Aug. 29) with 150mph (240km/h) winds, the fifth strongest to ever hit the U.S. mainland. About one million locals remain without power.

“It’s going to be a difficult life for quite some time,” said one local leader in the Greater New Orleans area.

About 5,000 National Guard members have been deployed to aid search and rescue.

In addition, more than 25,000 workers from around the country have mobilized to support power restoration in the state, according to CNN.

At least one person is dead after a tree fell on their home in Ascension Parish, in Louisiana’s Baton Rouge area.

State and local officials have conceded that number is likely to grow as search and rescue efforts continue, but argued the city had largely “held the line.”

“The systems we depended on to save lives and protect our city did just that and we are grateful, but there is so much more work to be done,” said New Orleans Mayor LaToya Cantrell on Monday.

She urged residents who had already evacuated their homes to stay put and not return until power and communications have been restored.

As the slow-moving Ida continues to move inland, it has weakened to a tropical storm – but the National Hurricane Center warned that heavy rain could still bring flooding to parts of Mississippi, Alabama and Florida.

Ida was previously deemed “life-threatening”, drawing comparisons to Hurricane Katrina, a 2005 storm that had a path similar to Ida and killed 1,800 people.

But it seemed that New Orleans’ flood defenses, strengthened in Katrina’s aftermath, have done their job. Governor John Bel Edwards said the levee systems had “performed magnificently” and none have thus far been breached.

“But the damage is still catastrophic,” he acknowledged on Monday. “We are still in a life-saving mode.”