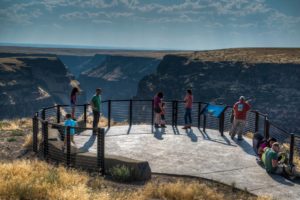 The Bruneau Canyon Overlook is one of the U.S. Bureau of Land Management’s Idaho sites that’s accessible to people with disabilities.

Roger Howard was inspecting an Idaho campground when a nearby camper said he hoped Howard didn’t “ruin the outdoors,” according to the Idaho Statesman.

Howard was assessing the campsite for compliance with the Americans with Disabilities Act, looking for features like accessible restrooms and parking spaces that would help more people use the site. It’s part of his role as the executive director of LINC Idaho, an organization that helps people with disabilities live independently.

“We hear the sentiment of ‘ruining the outdoors’ much less now,” said Howard, who has worked with disability advocacy groups in Boise since the 1980s.

In an interview, Howard told the Statesman he took a moment to talk with the camper, who worried “accessibility” meant more pavement and fewer trees and trails — essentially turning Idaho’s outdoors into something more akin to a city park. By the end of their conversation, Howard said, the camper had not only changed his tune but began to offer suggestions for even more improvements.

Howard and other accessibility advocates in the Treasure Valley said in recent years there’s been a real push to make Idaho’s outdoors — and the adventure of hiking, biking, rock climbing or otherwise recreating in it — more accessible to people of all abilities than ever before. New disability advocacy groups have cropped up in Idaho alongside existing ones, which are seeing a surge in participation.

Meanwhile, local businesses and land management agencies are updating their equipment and facilities to accommodate different needs while still maintaining the ruggedness that defines the outdoors.

“We’ve always looked at accessibility in this state under universal design,” Kowalczyk said in an interview, referencing an approach meant to make buildings, products and more usable by all people. “We don’t design it specifically for the person in the wheelchair.”

As a federal agency, the BLM is bound by the Architectural Barriers Act and the Rehabilitation Act of 1973, which mandate buildings that can be used by people with disabilities. But Kowalczyk said she strives to meet the higher standard of the ADA, which became law in 1990.