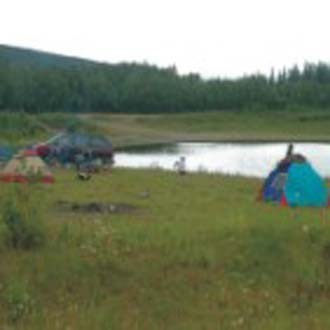 An undated photo of a camping site in the Lower Chatanika River Recreation Area north of Fairbanks, Alaska.

After a decade of sitting idle and falling into disrepair, Olnes Pond and the Whitefish Campground in central Alaska could be on their way to becoming a safe and family friendly area for camping, fishing and boating.

That’s because, for the first time in 10 years, the Department of Natural Resources could have the money to hire a year-round ranger to monitor and police the 400 acres of land known as the Lower Chatanika River Recreation Area on the Elliott Highway, the Fairbanks Daily News-Miner reported.

Responding to strong public support, Fairbanks Democratic Sen. Joe Thomas, who chairs the Senate Finance Subcommittee on Natural Resources, reinstated $159,000 in funding to the state’s operating budget on Thursday (March 22). The money would restore active management of the park.

A little more than half would go to the salary of a ranger and the rest would pay for annual maintenance and operations.

It’s good news to Marv Hassebroek, who collected 782 signatures on a petition to legislators earlier this year asking for attention for the campground. The park facilities have become a hotspot for vandals and illicit activities since the state pulled out, making it impossible for people to enjoy the recreational area, he said.

“It’s terrible the way it is now. It’s been abandoned for 10 years,” he said.

The park had received part of the funding when the operating budget went through the House, but the Department of Natural Resources was worried it wouldn’t be enough to hire the ranger.

The ranger’s responsibilities would include the Lower Chatanika River Recreation Area and the campground and park on University Avenue.

The funding for the park ranger is still not set in stone. The changes to the budget will have to be approved by the House before it heads to the governor, who holds line-item veto power.