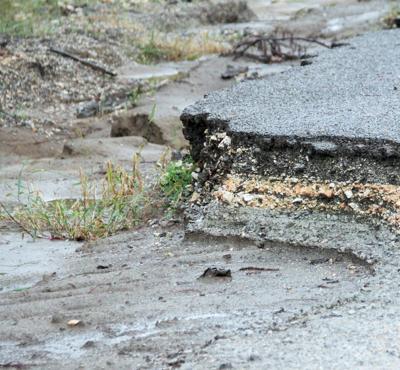 Cross section of East Side Road at Horseshoe Lake washed away by flood waters.

Things are slowly returning to normal at Alexander County, Ill.’s Horseshoe Lake State Fish and Wildlife Area, according to The Southern Illinoisan.

As a result of the breach in the Len Small Levee, located along the Mississippi River south of Olive Branch, Horseshoe Lake was inundated by the river from mid-February until the beginning of July.

Roads around the lake were peeled away by flood waters. Waterfowl hunting blinds were carried away by the raging river and campgrounds were shut down.

“The parking lot at the spillway was washed out,” said Joey Thurston, the Illinois Department of Natural Resources’ site superintendent. “East Side Drive got washed out real bad. We’re going to piecemeal it together until Federal Emergency Management Agency (FEMA) comes in. We hope to have our part done here in the next couple weeks. I would figure that FEMA would probably be next summer.”

Thurston said the park incurred about $500,000 in damage.

But, there is still plenty of work to do.