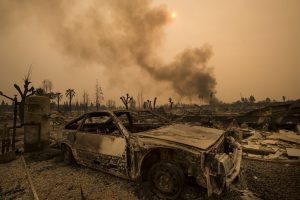 According to the Washington Post, Jonathan Cox, battalion chief of the California Department of Forestry and Fire Protection, called the fires “unprecedented” in how quickly they spread.

After first igniting late Sunday (Oct. 8), the fires — at least 17 in all — remained largely uncontained, and may continue spreading as dangerous winds whip back up.

At least 17 people have been killed in the fires.