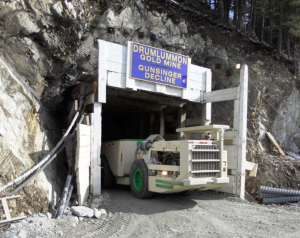 Entrance at the Drumlummon gold mine near Marysville, Mont. Photo from Mine Waste Conference 2011, presented by Joe Bardswich.

Lewis and Clark County officials say RV trailers set up by men working at the Drumlummon Mine in Marysville, Mont., may constitute an illegal subdivision, violating both county and state laws.

County Planner Kelly Blake said he’s been trying to meet with mine officials to discuss the trailers, which are parked at the old Drumlummon mill site near Silver Creek, but to no avail, the Helena Independent Record reported.

“If they’re going to create an RV park, there are requirements they have to meet,” Blake said. “I have contacted them three times and requested to sit down and talk and find out what their plans are for the future up there and the campers. We need to get a hold of the situation before we end up with a bunch of problems.”

The trailers, coupled with water quality issues, have sparked questions of how the mine north of Helena, reported to have significant reserves of gold, will be developed in coming months.

Darryl James, a spokesperson for RX Exploration, the Canada-based Drumlummon Mine owner, said he has been in contact with Kathy Moore, administrator of the county health department’s environmental services division, and that they’re trying to resolve any sanitation issues posed by the trailers.

James last week said that he didn’t know whose land the trailers are on — even though Moore and Frank Preskar, a county environmental health supervisor, toured the area with a mine representative and counted 11 trailers near the old Drumlummon mill, which is property owned by RX Exploration. James also said he didn’t know if the trailer owners have permission to park their rigs on the property, or if all the trailer occupants are miners.

“I can’t comment on it being an illegal subdivision,” James said. “We’re working with the county on what can be done.”

He added that they don’t have a timeline, but that dealing with the trailers “is on a punch list.”

“If they have to scatter, they’ll probably wind up doing the same thing somewhere else,” James said. “It’s better to know where they are and what they’re doing, than to scatter them and deal with it that way. We’re trying to find a reasonable solution rather than just scatter them.”

County Commissioner Mike Murray said the work camp is “absolutely a concern” that needs to be dealt with by the mine owners.

“By statute, we have to review it if there are two dwellings on a single lot,” Murray said. “It doesn’t matter whether it’s permanent or mobile.”

Moore said that when she and Preskar toured the site, portable toilets were available for mine employees to use, and they only obvious problem she noted was the disposal on the ground of dishwater — commonly called gray water — from two RVs. She said mine officials said they’d talk to the workers about water disposal.

But Moore added that if the mining effort continues to grow as the company anticipates, it needs to figure out how and where additional employees will be housed. Currently, RX Exploration does not provide housing for Drumlummon Mine employees, and there’s limited room for lodging in nearby Marysville.

“If they’re going to keep collecting trailers there, they need to have rules in place, and gray-water disposal has to be regulated according to the law,” Moore said. “We can work with them on that. But this is one of those work camps, and I’m honestly confused on how we move forward. I think there needs to be some review and some planning.”

Preskar added that shower facilities recently installed at the mine now need to meet the state’s public drinking water supply standards, since the Department of Environmental Quality decided that the waters could be consumed, and more than 25 people are using the showers for more than 60 days.

“The last I heard they were getting someone on board to work with both us and DEQ on the wastewater,” Preskar said.

Moore said there also is some concern that the miners may be exposed to contaminants, since many of the trailers are in areas where historic mining and milling took place. The state DEQ has reported that somewhere between Marysville and Silver City lies approximately 10 tons of mercury, which was “lost” in the late 1800s due to inefficiencies in the gold mining process.

At one point, the mercury reportedly was so abundant in the Silver Creek drainage that people could scoop it up by the spoonful. But throughout the years, it’s become masked within the mounds of tailings that cover the gulch, which runs parallel to the Marysville Road. It’s also hidden in the fine sediment underneath Silver Creek.

The Silver Creek drainage also has elevated levels of lead, arsenic, zinc silver and copper. Miners extracted gold and silver from the area for decades in both underground and placer mines.

“We don’t know if they’re being exposed to something in the soils,” Moore said.

Preskar added that possible soil contamination is something that would be reviewed under the subdivision process.

Whatever route the mining company decides to take regarding the trailers and future mining endeavors, Moore said she’s urged them to move on those plans.

“We’ve tried to give them the benefit of the doubt; this is a new business coming into the community and providing jobs. But there comes a time when you have to get hard nosed, and that point is close. They need to make some decisions today about what’s happening now so they can better plan for the future.”