In Scramble for Sites, Everyone Deserves a Chance 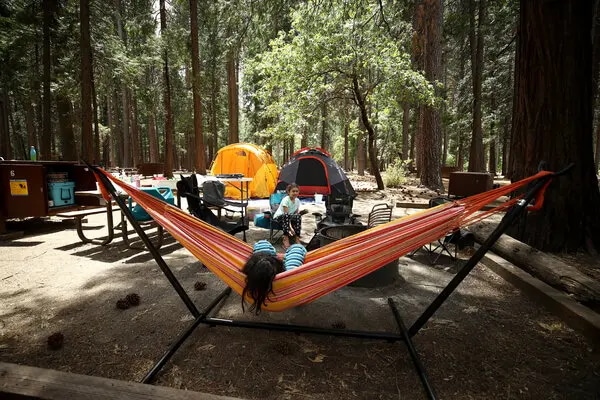 Noah and Valentina Gonzalez at a campsite in Yosemite National Park in 2020. Ezra Shaw/Getty Images

Editor’s note: This column was written by Michael Levy for The New York Times.

In the summer darkness of a July night in 2016, I was stumbling bleary-eyed toward the kiosk at the entrance to Camp 4, the campground in Yosemite National Park favored by climbers worldwide, when I tripped on something.

“Sorry,” I whispered to the body sprawled out on the dirt trail. In front of him, I saw dozens of other human shapes leaning against big logs on either side of the path. It was 3 a.m., and they had already staked out spots in line to get one of the 32 first-come first-served camping spots (now 61, after an expansion) that would be doled out around 8 a.m. I’d thought I had come early enough to be near the front of the line; now I wasn’t sure I’d get a campsite.

There’s got to be a better way, I thought, as I plopped down on the cold dirt next to the guy I had accidentally kicked in the ribs. He was back to snoring.

Almost three years later, in 2019, Yosemite National Park announced the first-ever reservation system for Camp 4 via Recreation.gov. Many other national park campgrounds have done the same in recent years to make the allocation of campsites more efficient.

Yet this online reservation system — with bookings that become available at an advertised time, like concert tickets — has raised concerns that it is disadvantaging the historically marginalized communities the Park Service has worked hard to attract in recent years to its more than 400 parks around the country.

This problem may only become worse. The summer is gearing up; last year, visits to the national parks jumped from 60 million people to nearly 300 million, after many park facilities were closed by the pandemic in 2020.

A study published in March in the Journal of Park and Recreation Administration underscored that worry. After examining how the reservation system worked at five federally administered campgrounds — one each in Colorado, Oklahoma and Utah, and two in Virginia — researchers from the University of Montana concluded that “online reservation systems present the unintended consequence of excluding low-income, and perhaps nonwhite, would-be campers.”

The reason involves socioeconomic factors that correlate with the requirements of booking online, the study’s lead author, Will Rice, a parks management specialist, told me. For example, lower-income groups are less likely to have access to high-speed internet — a must for the most sought-after campsites.

“It’s an open secret that spots are really hard to get,” Dr. Rice said. “You have to be online to reserve them right when the window opens. You have to have really high-speed internet so you can be one of the few people who get those reservations.”

To put that in perspective, in one remarkable instance cited last year by Recreation.gov, almost 19,000 people competed to book 57 campsites for the same dates. The locations were not disclosed.