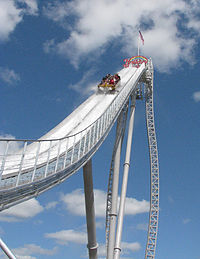 A boat descends the drop on Giraffica.

A Vanderburgh County (Indiana) circuit judge has ruled the widow of former Holiday World & Splashin’ Safari CEO Will Koch is the majority owner of the company that operates the park in Santa Claus, Ind.

Lori Koch named Matt Eckert CEO earlier this week, taking over for her brother-in-law Dan Koch, who had been in the position since 2010, Inside INdiana Business reported.

Lori Koch is now vice president of the park. Spokeswoman Paula Werne says $6.5 million in improvements announced in October are still on track.

The story was first reported by the Evansville Courier & Press.

The amusement park is located adjacent to Lake Rudolph Campground & RV Resort, one of the state’s larger RV parks.

Holiday World & Splashin’ Safari have been owned and operated by the Koch family of Santa Claus, Ind., since the park opened as Santa Claus Land in 1946.

Following the death of park CEO and President Will Koch in 2010, questions involving the interpretation of the company’s shareholders agreement arose. Koch family members turned the issue over to the court system.

Regardless of the outcome, the park will continue to be owned and operated by members of the Koch family. Holiday World & Splashin’ Safari will open for the 2013 season in May.