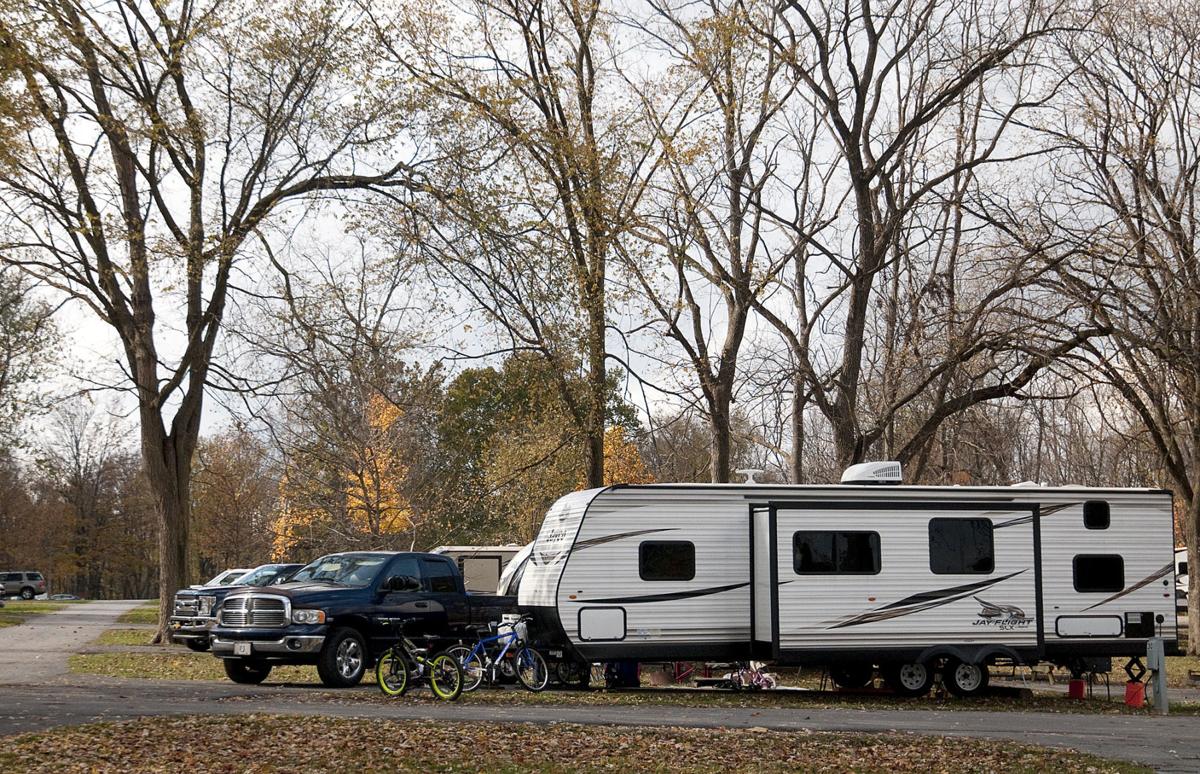 Indiana’s Mounds State Park has expanded a lot of its sites to fit larger RVs.

As a late afternoon breeze rustled the colored leaves on the trees, Brittany Johnson watched as her 3-year-old daughter, Kinsley, pedaled her small bike along a paved pathway at the Anderson/Muncie Kampgrounds of America (KOA) Holiday off Indiana 67 on a recent fall day, according to The Herald Bulletin.

Kinsley stopped and asked to pet Lucy, a spaniel belonging to Colin Connell, who was lounging outside his cabin trailer.

Johnson, from Wales, Maine, was accompanying her husband on a business trip to the Midwest, and the family had decided to stop at the Anderson/Muncie KOA for a few days. The 13-acre complex was mostly deserted, which meant the Johnsons could take full advantage of the campground’s amenities, including a playground, walking trails and a small beach fronting a three-acre lake.

“We really pretty much look for stuff for (Kinsley) to do,” Johnson said.

Other modern luxuries at the facility are not immediately apparent. Many of the large camping trailers parked along the path were hooked up to 50-amp generators. A quick glance at a smartphone reveals a secure Wi-Fi network, with a strong signal. A dog park offers campers’ canine companions plenty of room to roam. And propane tanks, precut firewood and other luxuries are available for small additional fees.

“People don’t want to rough it any more,” Connell said with a laugh. “But I think it’s a wonderful thing for families because they bring their children and they get a chance to really be with their children. If they’re home, they go to different rooms and stuff like that, but a place like this, you see a lot more interaction with families.”

Across the industry, a new generation is redefining the experience of enjoying the great outdoors, and although seasoned campers may chuckle at some newer ideas of “roughing it,” the demand for more modern amenities and a desire to stay connected has prompted campgrounds to adjust their offerings.

“(Camping) is really being driven and changed by the younger generation now,” says Mike Gast, vice president of communications for KOA. “These younger families are embracing the lifestyle, so that changes a lot. We’re really heartened at the fact that millennials are taking up the slack and are adapting to the lifestyle in different ways.”

That lifestyle is growing so quickly in popularity, it has taken on its own name: “glamping,” or glamour camping, loosely defined as a form of camping involving more extravagant accommodations than regular camping. KOA recently released the 2019 North American Glamping Report, a survey conducted by Cairn Consulting Group that examines the trend more closely.

It found that over the last two years, 30% of all leisure travelers have taken at least one trip that they define as glamping. That figure, the survey found, was fueled by a younger, more diverse demographic, with 60% of those self-described glampers coming from the Millenial or Gen-Z age groups.

Officials at Indiana’s state parks have noticed that campers’ preferences have evolved over time. For example, the 20-acre campground at Mounds State Park in Anderson has expanded many of its 77 individual campsites to accommodate bigger trailers — and bigger vehicles pulling them.

“When we built this campground, we didn’t expect to have these pullouts on campers,” says Scott Crossley, the park’s property manager. “These campers are 32 feet long. We’ve had to go through and extend a lot of these campsites and widen these campsites.”