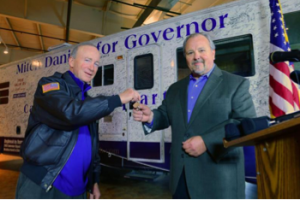 Indiana Gov. Mitch Daniels (left) presents the keys for his iconic 2004 campaign motorhome to BJ Thompson, a member of the Executive Committee of the RV/MH Heritage Foundation.

Indiana Gov. Mitch Daniels on Wednesday (Dec. 19) delivered his iconic 2004 campaign motorhome — dubbed “RV-1” — to the Heritage Foundation Inc.’s RV/MH Hall of Fame in Elkhart, Ind., where the road-weary Damon DayBreak Class A will be on display for the foreseeable future while on loan from the Indiana State Museum.

Daniels, who will step away at the first of the year from his elected position to assume the presidency of Purdue University in Lafayette, Ind., drove north from Indianapolis with a handful of aides while TV cameras chased him in his 2003 Class A with its troubled shocks and white exterior covered with thousands of signatures of Hoosier constituents who helped the moderate Republican win election in 2004 and again in 2008.

The drive from Indianapolis up north to Elkhart was for Daniels, he confided in his brief remarks at the Hall of Fame, somewhat of a nostalgic one as he prepares to leave office.

“We’ve just completed a very sentimental journey,” Daniels, considered a likely GOP presidential candidate early on in the recent primaries, told the assembled media. “With me on board during the last drive of RV-1 were the two still-young men who were out there with me for 16 months on the first campaign as well as the second, and Bill Oesterle, who originally came up with the idea of letting people sign it – a stroke of genius.

“So, we had a lot of laughs all the way up,” added Daniels, who’s well known for his penchant for riding motorcycles around the state. “There’s a memory and story behind almost every signature on there and every place it’s been.”

Daniels was welcomed to the Elkhart facility by Bob Martin, president and COO of Thor Industries Inc., which originally built the eight-year-old coach and sponsored a small reception at the Hall on Wednesday, and BJ Thompson, a Heritage Foundation board member who emceed the event.

On the business front, Daniels then singled out the RV industry for its leadership in helping turn around the Indiana economy, and he praised the old Damon motorhome with 58,000 miles on the odometer for the accessibility it offered him in reaching the citizenry of Indiana.

“We went into this recession with a high percentage – maybe 60-some percent – of all the RVs in the country made in Indiana,” said Daniels. “Coming out of the recession, I’m told, that total is more than 80%. What does that say? It says that we had a superior business climate and when companies were put to the test in a tough market — and forced to choose between what (plants) they were going to keep or close — almost without exception they chose Indiana. We’re so proud that this industry is centered even more here in our state than it was a few years ago.

“And if Thor ever needs a personal testimonial for the quality of their products, I’m their man,” said Daniels, adding that people constantly ask him about RV-1 more than they ask him about himself. “We took old Bessie here on trips it was never really designed for. We took it on dirt roads, gravel roads, one-lane covered bridges. There were no leisure cruises for RV-1, but it stood up. We were marveling on the way up, although the shocks are pretty much gone, how well she was still running. It’s a high quality product. That’s the way I know you build them up here.”