Insurance Harder To Come By As Calif. Hit By Fires 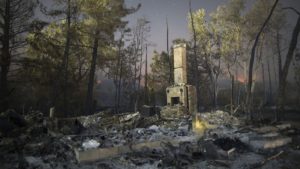 A home destroyed by fire.

Sheri Madrzyk and her husband got the letter from their insurer two years ago: Because they live in an area at high risk for wildfires, the company would no longer insure their home, according to the L.A. Times.

The couple live in Lake County in northern California, a place where more than 50% of the land has been burned by fires in the last several years. They were forced to scramble, eventually securing coverage through Lloyd’s of London — the insurer of the uninsurable — with a $2,100 premium. It was costlier than their last plan, but still within their budget. Then, in early 2018, they got another notice: their rate had ballooned to $5,800.

As California wildfires grow larger and more intense, an increasing number of insurance companies are not renewing policies for customers who live in areas they deem too risky to cover. The state estimates that more than 1 million California homes are considered at high risk for wildfires.

A California Department of Insurance report found that the number of homeowners in the wildland-urban interface who complained about getting dropped by their plans more than tripled between 2010 to 2016. Complaints about increased premiums rose 217%.

Those statistics provide a limited view of the problem, as the state has no way of tracking policy nonrenewals and individual premium hikes. But they reflect the cusp of a trend that is expected to worsen, said California Insurance Commissioner Dave Jones.

California is in the midst of the worst fire year in its history, with more than 10,000 homes lost and more than 50 people killed. Experts expect the toll will make insurers look even more closely at their level of risk in California.

Lake County residents were among the first to confront the insurance issue after the Valley Fire in Oct. 2015, which destroyed nearly 2,000 buildings in Lake, Sonoma and Napa Counties and at the time ranked as the fifth-worst wildfire insurance disaster in California’s history.