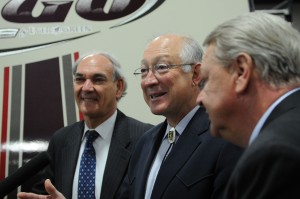 It turns out that Interior Secretary Kenneth Salazar has quite a background with RVs.

Salazar spoke Tuesday morning at the breakfast that kicked off the 49th Annual National RV Trade Show in Louisville, Ky.

During his speech to some 1,000 RV industry representatives and in comments afterward, Salazar revealed his RV roots date from his childhood when his family owned a Coleman folding camping trailer that was used for vacations and extra sleeping capacity at the ranch in Colorado where he grew up.

Derrick Crandall, president of the American Recreation Coalition (ARC), who accompanied Salazar on his tour of the RV show, offered this insight into Salazar’s ties to RVs.

“As a young adult, he and his brothers had a fifth-wheel unit which was used for hunting and fishing trips – and extra sleeping capacity for holidays and celebrations on his ranch.

“He used motorhomes for several of his statewide campaigns in Colorado, and drove the Obama campaign motorhome around the state in 2008. And he helped showcase new, lighter RVs early in his time as Secretary of the Interior during a 2009 summit he called on rural and American Indian tourism – an event showcased in early 2010 Motorhome and Trailer Life magazine articles, showing off a svelte Winnebago to Transportation Secretary Ray LaHood at Interior headquarters just a few blocks from the White House.” 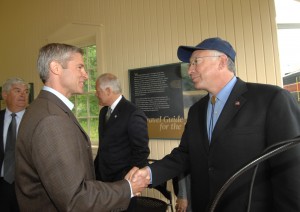 Secretary Salazar (right) greets Airstream Inc. President Bob Wheeler at a who visited Ohio’s Cuyahoga Valley National Park in June 2009 to announce several “fee-free weekends” at national parks. Airstream provided a travel trailer to be on site for the announcement. 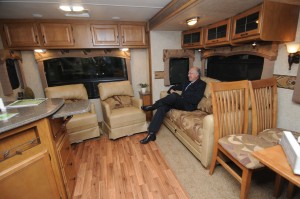 Secretary Salazar inside one of the RVs on display this week in Louisville, Ky.