Interior's May 1 Of 2 Power Breakfast Keynotes 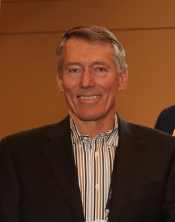 As the result of a scheduling conflict U.S. Interior Secretary Ryan Zinke has asked newly appointed Senior National Advisor for Recreation Rick May to appear on his behalf as one of two keynote speakers at next week’s RV Industry Power Breakfast in Elkhart, Ind., the Interior Department has informed the Power Breakfast Committee.

Hugelmeyer noted that while Zinke is a genuine headliner, the transition to Rick May, a former Navy SEAL now tasked with overseeing recreation for the Department of the Interior, is a timely option for Power Breakfast attendees.

“We’re very honored for the industry to be able to host Rick May,” said Hugelmeyer, who also serves as vice chairman of the newly renamed Outdoor Recreation Roundtable (ORR) through which RVIA and its recreation industry allies have been lobbying for improved maintenance and campground capacities in the national parks. “It’s important because earlier this year the Outdoor Recreation Roundtable at one of its very first meetings with the Secretary of the Interior had pointed out that no one within the federal government was focused on recreation. And it’s such a key driver of the economy – 2% of the GDP is attributable to recreation – yet it’s been a real miss by previous administrations not to have someone dedicated to focusing on this industry segment.

“And he (Zinke) followed up on that request and formed the position of special adviser to the secretary focused on outdoor recreation in the country,” Hugelmeyer told RVBusiness, which facilitates the annual breakfast. “It’s the first position of its kind and he appointed his long-time friend, colleague and active outdoorsman Rick May to the post. Rick was just officially put in that role and confirmed last week. And so now we’re (the RV industry) in a position where we’re going to be speaking to the most senior official in the entire government that’s focused on recreation.

“And the first place he’s going to appear in this new role is going to be the RV industry (at the Power Breakfast), and that’s also fitting because we’re such a large and vibrant part of the outdoor recreation economy in the country.”

RVBusiness is the sister publication to Woodall’s Campground Management.

May, among other things, was involved in the recent establishment of the Department of the Interior’s “Made in America” Outdoor Recreation Advisory Committee that initially includes Newmar Corp. President Matt Miller, TAXA Outdoors President and CEO Antonio Gonzalez and Jim Rogers, past chairman and CEO of KOA.