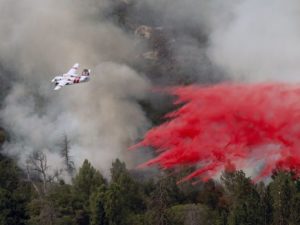 A plane sprays fire retardant on the Ferguson Fire.

Authorities say a vehicle caused the California wildfire that killed two firefighters, destroyed nearly a dozen buildings and closed the Yosemite Valley, according to the VC Star.

The fire began on July 13 along Highway 140 in the Sierra National Forest, about 45 minutes northeast of Fresno. It was contained in August after burning nearly 97,000 acres in two national forests and Yosemite National Park.

More than 3,000 firefighters battled the blaze, which injured 19 people, destroyed 10 buildings and closed Yosemite for weeks in the midst of the tourist season.

The fire is believed to have begun on eastbound Highway 140 between 8 p.m. and 8:25 p.m. July 13. The area is an extremely vulnerable location — in the heart of mountainous wildland that had become a tinderbox, devastated by trees killed by five years of drought and whose weakened condition left them to be infested by bark beetles. More than 129 million drought-stressed and beetle-ravaged trees have died across 7.7 million acres of California forest since 2010, mostly in the Sierra Nevada.