One of the RV sites at Honey Creek Resort State Park in Iowa. Some of the cottages are visible in the background.

Click here to visit the website of this beautiful state park that offers many amenities but can’t pay all its bills.

Managers of the Honey Creek Resort State Park at Lake Rathbun in southern Iowa are asking for a state bailout as it struggles to make payments on its loans. Iowa’s chief parks manager is asking for $27 million to pay off the costs of building the so-called destination park, Radio Iowa, Des Moines, reported

Department of Natural Resources Director Chuck Gipp told Gov. Terry Branstad at a budget hearing that the resort is having to tap into state environmental funds to make its bond payments. “And it is making money, it is making money, but it’s not making enough money to pay off the bonds and the interest,” Gipp said.

“It’s paying for its ongoing expenses, it’s not paying for the capital costs of building it,” the governor replied and Gipp said that was correct. Gipp says Honey Creek has boosted the economy in southern Iowa. 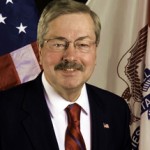 “While sales tax collection was falling in a majority of the counties across the state of Iowa, two counties that experienced increases in sales tax at that time were Wayne and Appanoose county. And the only new thing that occurred thing different is the proximity to Honey Creek state resort,” Gipp says.

The governor replied, “So there is some economic benefit in the area.” Gipp replied, “There is.”

The governor suggested he will look for a one-time source of money to cover the bonds. Developers had initially projected that the resort would make enough money to cover the debt. Honey Creek offers guest rooms, cottages, golf and water sports on the lake.