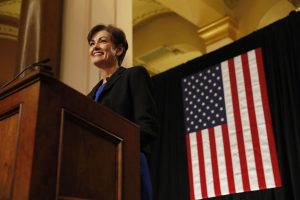 Iowa Gov. Kim Reynolds speaks after being sworn in as governor during a ceremonial swearing in, Wednesday, May 24, 2017, at the Statehouse in Des Moines, Iowa.

According to the Globe Gazette, Chuck Gipp, director of the state Department of Natural Resources (DNR), proposed a status-quo general fund budget of nearly $13.7 million, but he sought an extra $1 million each for park infrastructure and low-head river dam improvements and a boost of $4 million for the resource enhancement and protection (REAP) program from other funding sources for the fiscal 2019 year that begins next July 1.

“We know it’s going to be tough,” said Gipp, who also made a pitch for bills pending before the Legislature to raise fishing and hunting fees for the first time since 2003 to help fund programs popular among Iowans. He noted his agency’s general fund allotment is about “half of what it used to be” in fiscal 2008 and he said a lot of the things DNR officials fund are aimed at heading off environmental concerns.

“Preventing is a heck of a lot cheaper than cleaning up after the fact,” he told the governor and a panel of administration managers conducting budget hearings in advance of next month’s Revenue Estimating Conference and the start of the 2018 legislative session on Jan. 8. The governor plans to unveil her budget plan to lawmakers in January.